The English Football Association won unanimously after the German FA (DFB) withdrew just before the Uefa vote to focus on a bid to stage Euro 2024. 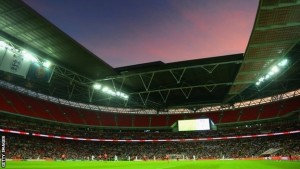 Cardiff missed out as one of the 13 venues that will host matches for the first pan-continental Euros. England's FA chairman Greg Dyke, 67, said: "This bidding process was open to more than 50 Uefa countries so for Wembley to be recognised in this way is testament to a lot of hard work behind the scenes."

Dyke confirmed that the FA had held discussions with their German counterparts but said there was no deal in place to back DFB's bid for Euro 2024.

"There is no agreement other than we will not bid for 2024, as we wouldn't get it," Dyke said.

England manager Roy Hodgson said the opportunity to play a final at Wembley would be excellent motivation for his players.

"For the young team that is emerging, many of those players will be at their best football years in 2020," the 67-year-old said. If the young players of today don't use this to spur them on then they are making a mistake. By 2020 some of them will be playing their fifth tournament and that is the type of experience you can't buy."