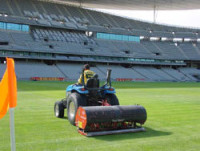 The final of the 2005 Champions League, the top trophy for European soccer teams, was played on a pitch prepared by Verti-Drain deep aerators. Similarly, this year's UEFA Cup Final will also be held at a stadium where the Verti-Drain plays a key pitch maintenance role.

Liverpool and AC Milan faced each other in the Champions League Final at the Olympic Stadium in Istanbul. Pitch maintenance is undertaken by the Sporyapi contracting company, whose Mr Ali Ozturk explains that they use two different Verti-Drains to ensure top quality.

"We use the high speed Verti-Drain Mustang 7117 to break up surface compaction to a depth of 15cm (6in). It encourages lateral root growth to strengthen the sward and gives a resilient surface that withstands players' sliding tackles. A larger Verti-Drain 7316 is used occasionally to aerate to depthsof 30cm (12in). This allows roots to penetrate more deeply and increases water penetration."

Charterhouse Turf Machinery distributes Verti-Drains in the UK on behalf of its Dutch parent Redexim-Charterhouse. Managing Director Philip Threadgold points out "Liverpool's Anfield pitch is also maintained with a Verti-Drain 7316 which they have owned for several years, so perhaps this was a good omen for them."

The Istanbul Olympic Stadium also uses other Redexim-Charterhouse machines including a 1250 Rink Topdresser and a Verti-Seed overseeder.

The UEFA Cup Final will be held at the Alvalade Stadium in Lisbon. Built for the Euro 2004 Championships, it is the home ground of Sporting Lisbon, who coincidentally are in the final against CSKA Moscow.

The Lisbon pitch was constructed using the Desso system, which combines natural turf with millions of polypropylene fibres for extra resilience. Maintenance is the responsibility of Mr Carlos Reys of Sima Sports, who uses a speedy Verti-Drain Mustang 7113 regularly with needle tines to break up compaction, in line with Desso's recommendations. Special cross tines are used occasionally to increase the degree of compaction relief with minimal surface disruption.