On June 10, the eyes of Europe will be on the Stade de France, when France and Romania play the first match in the Euro 2016 Tournament 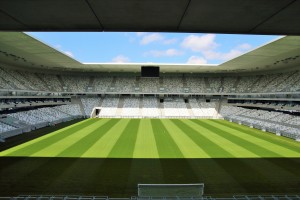 This, along with most of the tournaments 10 host stadiums and 60 training grounds have chosen DLF seed to provide the hard-wearing turf the championship demands.

With the responsibility to meet UEFA standards, the majority of the tournaments groundsmen have overseeded their pitches with top-performing mixtures of perennial ryegrass from the DLF brands Top Green Eurosport and Johnsons Sports Seed. Top Green Eurosport combines the fineness of leaf, the shoot density, and the wear-tolerance of its top varieties of diploid turf perennials with the persistence, stress-tolerance, and disease-resistance of 4turf®.

Benoit Petitjean, General Manager of DLF France commented, "We are excited to contribute our turf grasses to the majority of the French football stadiums, including the Stade de France which is staging both the opening match and the final. We are confident that the performance of our sports grasses won't let the players or the fans down."