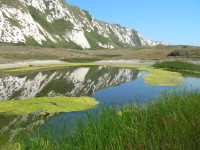 The latest consignment of Sea Couch Grass has left the Norfolk nurseries of British Wild Flower Plants (BWFPs), bound for the man made nature reserve Samphire Hoe, which has been built with the spoils of the Channel Tunnel.

Started in the late 1980s when the tunnel was dug, the 89 acre area of 'extra' land protruding into the channel beneath Dover's white cliffs is bounded by a 1.7 kilometre sea wall and holds 4.9 cu metres of chalk marl, a mixture of chalk and clay. Owned by Eurotunnel and managed in partnership with the White Cliffs Countryside Project, Samphire Hoe was originally sowed with 31 different types of native wild plants but the latest recordings show that this number has risen to 200.

Among the new botanical settlers is the native Early Spider Orchid which grows on the cliffs above. "We had 67 plants in 1998, but at the last count in 2009 there were around 11,000," says Senior Project Officer Paul Holt. "We've been keeping conditions right for them - they like short grassland - and using sheep and cattle as a management tool to graze the area. This winter we had 40 sheep and 5 cows grazing the Hoe."

The Horseshoe Vetch supplied at the outset by BWFPs is "still hanging in there" according to Paul and is the principal food plant for the caterpillar of the Adonis Blue Butterfly, which the project wants to encourage. The Sea Couch Grass (over 60,000 plants have been supplied by BWFPs over the years) has an even more vital role to play. "It's as tough as old boots and as its name suggests it's not bothered by salt," Paul continues. "Our biggest challenge has been a section at the West end of the site which is often battered by crashing waves. It's been difficult to get ground cover but we've been experimenting with different types of matting, and we think we've cracked it. The Sea Couch Grass is planted to grow through the matting."

Linda Laxton, MD of BWFPs has been following the project with interest. "I visited the site a few years ago" she says "and was amazed at the sheer scale of the reserve and diversity of plant and wild life that it supports. Samphire Hoe is something that we are very proud to be involved with."