4 Even more Tough and Testing Times at Tividale 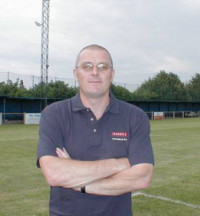 It's been a while since I last posted an article on this site but felt now is the right time to share with you some of the ups and downs of last season at Tividale Football Club in the Black Country.

Going back to the end of the 2005/06 season, my pitch had 86 games in total played on it which, at our level of football, seems to be the norm these days. However, I managed to keep around 70% of grass cover which I was pleased with. It hadn't looked so good at the same stage in my previous 5 years or so. I therefore took the decision to keep almost everything in house as regards renovation work.

I applied a 70/30 dressing to the worst areas of the pitch and forked the material in manually. I then created a tilth to these areas and applied appropriate quantities of Bar 7 grass seed and raked in. The whole area of the pitch was drag matted, pre seed 8:12:8 fertiliser was applied and that was that. All was well to begin with as the weather was conducive to good growing conditions with wet weather prevailing. Seed germinated in five days and all looked well. Until the long, hot summer began that is. The pitch was also vertidrained, but later than I had anticipated due to various factors.

To cut a long story short, with inadequate artificial irrigation I was facing a losing battle. I had applied controlled release fertilisers as I had done in the past but even they didn't seem to help. I did everything I could. I left the grass long to help protect it but with pre season friendlies looming I had to begin lowering the height of cut. I had a run in with a manager of one of the teams about the pitch condition which didn't help matters either. Basically the pitch was in a poor condition before the season had even kicked off.

It didn't get any better either. Our committee decided to lease the pitch out to another team, Causeway United. That meant that, in total, six teams were going to be using the pitch. I have to admit that I was dreading times ahead and I was right. The season for winter sports was wet to say the very least. Games were being postponed, which inevitably led to a fixture pile up towards the end of the season. In total, 20 games were postponed, yet some games were played in conditions that can only be termed as impossible. The thing that I dislike about football at this level is that sometimes the groundsman can be ignored. Sometimes I have thought that no way this game is going to be played only to find out the next day that the match referee deemed the pitch playable and the game went ahead. You can only imagine what faced me when I turned up to assess the situation with the pitch.

I was getting a lot of negativity regarding the pitch filtering through from various parties. One of the home sides asked me how it was that their top goal scorer was hitting the net more times away from home and they defended worse at home. The implication was clear to me and I told them that quite simply that the pitch hadn't recovered from the basking summer temperatures and too many games were being played in horrendous, wet conditions. Funny thing was that the away team had won that day on the same pitch!!

I couldn't wait for the last game of the season to be over and done with. The penultimate week saw me having to contend with six games in seven days. Ironically, the pitch had dried out so much that my trusty dry line marker was in constant use! One newspaper report of the game even described the pitch as "resembling Morecombe Beach". My tongue in cheek response to that was "well there are loads of donkeys that play on it"!

The season concluded with 114 games being played in total. Far too many for a pitch like ours to sustain. However, we got there and I stated to various people within the club that we had to make radical changes for the future as I didn't want to go through a season like that again.

I have a very open and honest relationship with the powers that be in my club and I regularly keep them informed of products that may be of benefit to me and ultimately be of benefit to the pitch. The Chairman is thinking of changing his phone number!

Because last summer was so hot and dry and having inadequate irrigation, it caused me problems with my fertiliser programme as I had already purchased granular feeds. The obvious answer was to use liquid feeds. However, I didn't have a machine that could apply liquid feeds. I got all the information I could on the Fleet Kombi and spray boom and submitted it to the Chairman. I then contacted Ian Courage from Fleet and arranged for him to come to the club and demonstrate the machine to us. It coincided with a semi final that we had that night and so I strung the pitch out prior to Ian turning up. It did a fantastic job with the lines being so bright that you could probably see them from the moon! Players and spectators commented positively and the Chairman was impressed too. The selling point for me however, was the boom. With hot summers in mind it would at least give me the opportunity to apply liquid feeds and tonics if no imminent rain was forecast. I needed to re establish my pitch as soon as possible and so it was decided that we must have one.

I then decided to approach the club about our irrigation problems. I again did my homework and priced up what I thought was needed to improve things. At the time we had a single sprinkler and hosepipe that I had to manually keep moving around the pitch. Tedious, but it had to be done. Another limiting factor was that the club is metered as regards water. From various posts on the message boards that I had read on this site I gained information on water costs. From what I gathered the club is charged for water coming in and sewage charges going out. I contacted our billing company and after an hour or so of being passed from pillar to post eventually got to hear what I needed to hear. Basically, if we installed a sub meter on our supply to the pitch then the cost would be adjusted accordingly. In a nutshell we would then only be charged for water going in, thereby nearly halving the costs.

After consultation with various parties, I suggested that we install 125 metres of 50mm MDPE pipe work underground. At each 25 metre we should install a connection valve with a geka fitting concealed within a valve box for connection to hosepipes and sprinklers stretching across the width of the pitch. As I speak this process is almost complete. The club again listened to what I had to say. Once fully installed I hope to get a travelling sprinkler on demo to see if it works with our system. If so, then who knows? They might just buy me one!! At present we do have a timer in place so that we can leave the appropriate valves open and water in the middle of the night.

So, that leaves me to let you know what happened regarding our renovation work at the end of last season to try to get things right for the next onslaught of season 2007/08.

Again, having had many discussions with the Chairman it was agreed that because the pitch was in a lot worse condition than this time last year, something on a more major scale was required. For the last two seasons I have kept costs to an absolute minimum, but this time around we needed to improve things.

I class Dave Saltman as a friend and so I asked him if he and the lads at Wolves could help with my renovation work. Plans were discussed and costs agreed. They fitted everything in perfectly to meet my needs to their credit.

The following is what my renovation work consisted of:

Terry Carver and Ken Bates from the Wolves came in one day and made an early start. Terry was vertidraining and Ken was seeding using a Vredo seeding machine. I managed to get to the ground around mid day and they were still at it. Terry told me that certain parts of the pitch were bouncing him around which didn't surprise me! Ken showed me the set up of the Vredo 2.2 metre seeding machine. The discs created a depth of about 25mm. When I returned to the club on the night time I was amazed to see very little seed on the surface. It has been quite noticeable that there haven't been so many pigeons scavenging this year which has been a bonus.

Since works were completed the weather has been quite favourable with wet weather prevailing. The seed again germinated within five days.

The following is what my fertiliser plans are after receiving soil sample reports back from Julie Wall of Avoncrop Amenity. I have decided to follow a complete Scott's programme this season which will include the following.

At present I am mowing the pitch with a Wessex rotary mower with height of cut set at 50mm. I am currently cutting every three days but the frequency will increase as growth improves. I will continue to use this for a while letting clippings return to the surface. Approximately two weeks before the first league game I will start using my Dennis 36 inch cylinder and gradually bring the height of cut down to approximately 32mm and collect clippings. Supplementary to this I will aerate the pitch as conditions allow and irrigate as necessary.

As you can see it is quite a comprehensive programme for our level of football, but one that is important for the sustainability of the pitch.

I am looking forward to carrying out this programme. The Kombi and boom now offer me the flexibility that I need in order for me to achieve the desired results. Additionally I have the new water system in place to help out should we get the same type of summer that we had last year. I must be the only one at the club with a smile on my face when it rains! 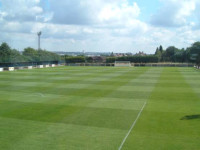 In closing, I feel it vitally important to keep the communication channels open with the powers that be at whatever level of football you work at. I have showed over the years that I can do a good job given the right resources. Like most things in life, there is a cost to achieving good results. The cost of our watering system wasn't cheap. However, it is an investment for the future. We simply couldn't carry on the way we were if long, hot summers are to be more prevalent. The Kombi and boom weren't cheap but they will help me enormously, especially the boom. The fertiliser plan above isn't cheap either. But again it offers me the flexibility that I need to get the pitch back to how it was a few seasons ago.

Good luck to you all out there for the new season.