0 Everris comes to the Rescue for Moortown Golf Club

Over the years, Moortown GC has changed the way they have managed and maintained their rough. Everything from wall to wall cutting through to areas being left all season has been tried over the years 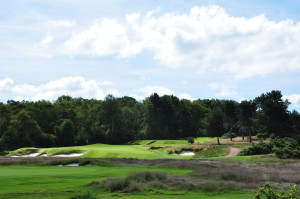 Unfortunately, this has led to a perennial ryegrass invasion for Course Manager Steven Robinson. Having been familiar with Everris products for the entirety of his greenkeeping career, there was only one company he would turn to.

Founded in 1909 and well known as being the host of the first ever Ryder Cup match on British soil, Moortown is regarded as a great, historic golf course. Since that Ryder Cup debut in 1929, the club has held many professional and amateur tournaments with a number of legendary golfers gracing the course such as Sir Nick Faldo, Bernard Gallagher and Sir Michael Bonallack.

Although steeped in history, Moortown has a superb range of modern facilities accompanied by a quality playing course and Steven believes that it is important to use only the finest products to ensure the club keeps intact with its illustrious reputation.

"Keeping high standards is very important here; this course is highly regarded nationwide and is in all the top rankings. We also have a lot of international visitors because of the Ryder Cup history, so it's important that the course is at its best at all times.

"I've used Everris products, from time to time, all of my greenkeeping life. You know you are going to get a quality blend, they always do exactly what they say they are going to do and there is never any issue as to whether they will work." said Steven.

Steven first became aware of Moortown's on-going perennial ryegrass problem six years ago when he was interviewed for the job. To keep the unwanted grasses under control, the grass was being cut short but this was not really in line with a top Heath/Moorland course. In order to allow it to grow and create desirable ecological rough through the season Steven believed it needed something more than just mechanical treatment to achieve the desired results and he had just the product in mind.

Rescue is a powerful, selective herbicide designed to eradicate perennial ryegrass and other invasive coarse-leaved grasses from close-mown and longer areas of fine turf. It can be applied with any conventional golf course or bowling green sprayer, including knapsacks and is rain-fast in just one hour. Rescue is swiftly replacing previously expensive, time consuming and ineffective conventional ryegrass reducing techniques.

"There are a lot of areas on the course which are lush and moisture retentive and as a result we see a lot of undesirables such as ryegrass, Yorkshire fog and other coarse grass. To tackle this we cut it down at the end of the season with the flail collector which removes the arising before applying the Rescue just as it is starting to recover, because this is when the grass is more susceptible. We primarily targeted the popular areas where golfers end up the most and would often lose balls."

Steven applied Rescue at the recommended rate of one litre per hectare, mixed in 500 litres of water over a period of two and a half years during the spring and autumn windows. He has not looked back since.

"There are a lot of fescue grasses coming through now (which were naturally there) and this is solely from using the flail collector and spraying the Rescue. Where we haven't applied the product, in the surrounding areas, you can really see the difference.

"If we didn't have Rescue as an option then the process would have taken much longer and we probably wouldn't have been able to achieve this with just cutting and collecting. Based on my experience, in terms of eradicating rye and Yorkshire fog, I'd most certainly recommend it," he said.

Steven was also full of praise for Everris technical area manager Simon Hardcastle, who is always available to provide him with advice.

"I've worked with Simon ever since I've been in Yorkshire and it's nice to walk the course with him and discuss any issues we may be having."

ICL/ Everris products are available to purchase from the Pitchcare Store.