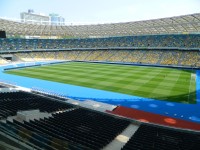 The challenges of constructing, maintaining and presenting world-class football pitches in Eastern Europe have been met thanks to experienced turf industry organisations charged with delivering just that for Euro 2012.

Many UK-based companies have been involved in the project, including fertilizer and seed producer Everris, managed under the stewardship of STRI's head of stadia services, Andy Cole.

"The success of a project on this scale comes down to planning, expertise and resources." Andy explained. "The sourcing of a range of quality products in substantial quantities, the logistics of transporting them to stadia and the provision of technical support on a local basis, were some of the reasons we chose Everris for this project. We relied upon them and their global resources to deliver in challenging circumstances, and they did."

Everris fertilizer programmes are used by turf managers at some of the world's most iconic sporting venues - the 70,000-seater Olympic Stadium in Kiev being no exception. The UEFA Category 4 Stadium, home to the Ukraine national team and Dynamo Kiev, has undergone extensive renovation over the past few years since being selected to host five Euro 2012 fixtures, including the final.

Stadium Director, Vladimir Geninson, said: "I consider our football pitch to be one of the best within Euro 2012 stadia. This must be attributed to the great work of our groundstaff team, but we all recognize that our pitch has performed because of the outstanding job carried out by ENGO Company, who constructed it together with pitch contractors and engineers Clive Richardson Limited, under the management of STRI."

Stadium turf grown in Slovakia over a period of two years by Austrian turf producer, Richter Rasen, was laid in summer 2011, establishing well in the natural RR rootzone, which was certified to DIN standard and selected for natural stability and water infiltration. It was then overseeded with Everris' ProSelect 1 Premium Sport ryegrass seed mixture.

The pitch has endured a winter where temperatures plummeted to -30 degrees with a heavy fixture list, but remains a playing surface praised by players and the media alike.

"On 1st July, a full-capacity stadium crowd and a television audience of millions will witness the culmination of years of work planning and preparing the playing surfaces for this tournament," said Everris UK's Sales Development Manager, Ed Carter.

"Thanks to the combined efforts of international turf specialists, including STRI, CRL, ENGO, Richter Rasen and Everris, Euro 2012 will draw to a close in style on a perfect pitch."