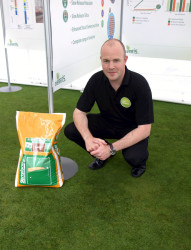 A reminder of potassium's importance as a vital turf nutrient was one of the key messages delivered to delegates attending Turf Science Live, organised and co-presented by Everris, Jacobsen and Syngenta at De Vere Carden Park, near Chester, in early July.

Speaking at one of seven hands-on educational exhibits visited in turn by turf managers, greenkeepers and groundstaff attending the event, Everris's sales and development manager, Ed Carter, listed the principal reasons why potassium is essential for quality maintained turf.

"By controlling the opening and closing of the stomata or microscopic pores on the surface of the leaf, potassium is able to raise turf's tolerance to drought," he said. "The element is known also to increases cell wall strength, boosting the grass plant's resistance to disease, wear and saline conditions as well as helping it better withstand high and low temperature extremes."

Two further turf benefits provided by potassium are extended retention of colour and improved uptake of nitrogen, calcium and magnesium, nutrients required by turf in varying quantities for strong, healthy and consistent growth.

To illustrate the advances being made by Everris R&D in delivering potassium to the plant in a controlled and effective way, he focused on Everris's SierraformGT range of fertilizers which contain both slow-release nitrogen and slow-release potassium.

Around six years ago, the product was being marketed solely under the Sierraform name, without the GT suffix, with nitrogen alone being available to the turf in slow-release form.

"A major innovation achieved within our laboratories saw tiny molecules of potassium being fused with silica and then combined with nitrogen to produce micro-granules able to release their key elements consistently over time," Ed explained. "The potassium breaks away following contact with moisture yet is still able to maintain a steady, gradual release which minimises losses due to leaching, improving potassium availability and uptake by the plant."

Trials have shown that Everris's unique slow-release potassium provides more than twice the quantity of soil-available potassium when compared with conventional potassium sulphate, the traditional source of potassium. 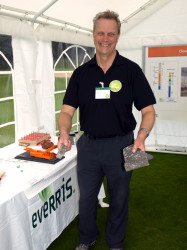 The proof is seen in the additional tolerance to drought provided by SierraformGT over its Sierraform predecessor. Assessed over a two month trial, the vigour of SierraformGT-treated turf seven days after its last watering was found to be 25% better than the equivalent turf treated with Sierraform.

A glimpse of an exciting future advance in potassium availability and utilisation for turf nutrition was provided at Turf Science Live jointly by Ed Carter and Neil Rowley from Everris's sister company, Cleveland Potash.

The latter operates the United Kingdom's only potash mine, producing each year more than 2 million tonnes of sylvinite ore which is processed into potash for inclusion as the K constituent of fertilizers. The mine also produces sodium chloride for use as winter road salt.

The potash seam being mined by Cleveland Potash lies nearly a mile underground at its deepest point and now stretches five miles out beneath the North Sea.

Around 150m beneath the potash seam lies a unique nutrient source, comprising potassium, calcium and magnesium sulphates. A major investment by Cleveland Potash has seen the first extractions the unique material begin.

"In theory, the new nutrient source could be processed and spread straight onto the land as a totally organic 0-0-14 fertilizer plus calcium and magnesium," Ed suggested. "However, its unique properties make it ideal for blending with other important elements to maximise its abilities as a fertilizer. This potential is now being investigated by Everris R&D with a view to launching the world's first fertilizer containing this new natural, multi-nutrient ingredient."