by Matthew Campelli
in Football, Local Authority, and Industry News
on 18 Jul 2016 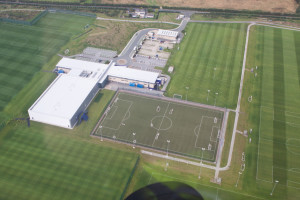 Everton Football Club has received a £4m cash injection from Liverpool City Council to make improvements to its training ground, including the development of a new show pitch.

Liverpool City Council purchased the Finch Farm training complex in 2013 and subsequently let the facility back to the Premier League football club on a 40-year lease, making a profit from the rental income.

Now the local authority has earmarked the funds after Everton secured planning permission from Knowsley Council. As well as a show pitch with spectator seating - which is being lined up for the club's under-21 fixtures - the improvements will also include a new recuperation block, a new education hub, a new groundsman building, classroom space, a media room and additional car parking spaces.

In addition, the investment is expected to support community projects occurring at the training complex including football for children, women and the Everton Deaf team, as well as education for young adults who previously struggled in mainstream education.

As a result of supplying the loan, Liverpool City Council will demand more rent from the 2016 FA Cup semi-finalists. In the first two years of ownership the council has generated £400,000 of income that has been set aside for public services.

A Liverpool City Council spokesperson said the decision was an "exceptionally good deal for the council taxpayers".

"It's part of the mayor's (Joe Anderson) Invest to Earn strategy which has so far delivered 1,600 new jobs, attracted £150m of additional funding and is generating £3m per year to support essential services," the spokesperson added.