An EVO 165D from GreenMech has become the dominant machine on the arb fleet of Swansea-based Rooted Tree & Landscapes. Owner Craig Mylan has been a loyal user of GreenMech woodchippers since he started the company in 2008 with the EVO becoming his fourth machine, and it's the most powerful yet - transforming the way they carry out both commercial and domestic tree works. 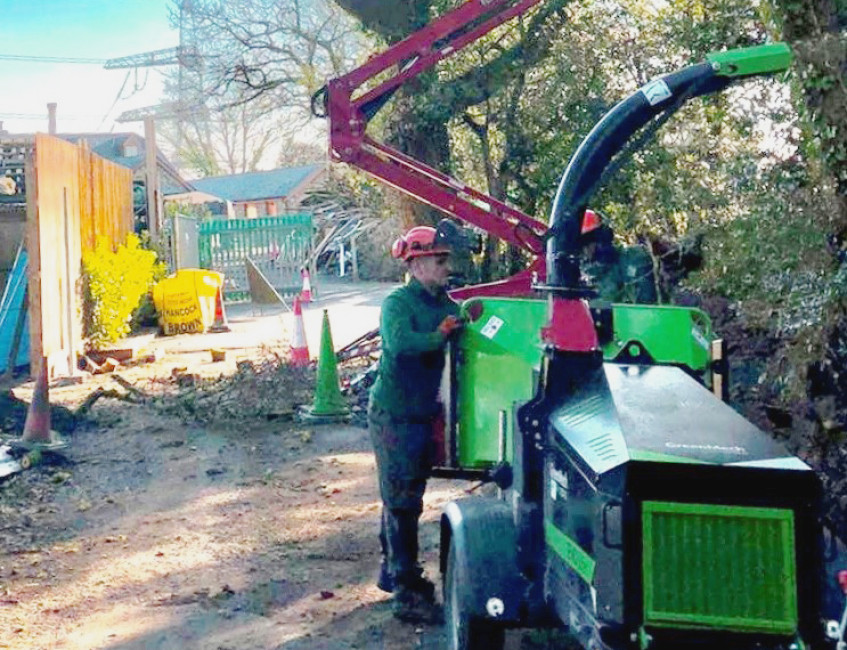 "I first saw the EVO 165 at its launch at the 2019 Arb Show and the first thing that really hit me, or didn't hit me more to the point, was the noise! We have a duty to our customers and our operators to look at things like reducing noise and this machine demonstrates real progress" explains Craig who heads up a team of six. "There are so many new developments on this machine - simple things like the foldable chute which makes storage of the unit that much easier."

From a performance perspective, the re-designed flywheel and large infeed chute have resulted in labour and time savings when it comes to processing large volumes of woody waste. "The more powerful pull-through means we can feed in material without having to sned it down first. It then chips whatever we feed in quickly and efficiently before throwing it out again cleanly. It is without doubt the most powerful machine we've used in terms of torque and bite." With its 165mm chipping capacity, the EVO isn't the largest machine in Craig's fleet, however it has been used on a range of projects both large and small.

Another factor that has kept Craig loyal is the superior back up support he's received from those in the GreenMech dealer network. "I've worked closely alongside Julian Cullis of GreenMech since way back when, who has always kept me abreast of new and future developments. We're also fortunate to have Chipper Hire South West not too far away who have a fantastic fleet of GreenMech machines to hire if we need them. With the EVO, the support we received from our local dealer Powercut in Carmarthen has again been first-class."

"For us independent companies" Craig concludes, "our success depends on reliable and robust equipment that's capable and working to its full capacity. The fact that the new EVO is a great machine is one thing, but the whole GreenMech ethos to support their users every step of the way is another to really be applauded."