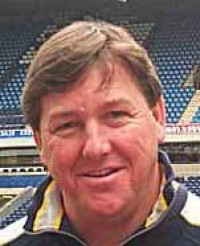 Hi Everybody, this is yours truly reporting from a very wet and cold Ewood Park today Tuesday 4th of June. What happened to flaming June anybody?

Well the pop concert has come and gone, it was totally sold out with a 25000 crowd going daft to the sounds of S club 7 and atomic kitten etc.

We officially sold 8000 tickets for people to stand on a Tildenet cover (thin geotextile material) on my beloved playing surface. But by the end of the day after a great performance by the hired in stewards we ended up with at least 15000 of them on the pitch jumping up and down to the sounds of a boy band called 5("whoever they are").

Anyway after it was finished my team and I set about removing the Tildenet covers first thing Sunday morning.
By about 4pm that day it was back to the nearly green sward we had covered before the event, apart from the area directly in front of the stage area which was by now unrecognisable just a complete mush of black layer even the brightest American professor would be proud of!

I had to cheer up the boys by telling them we had nothing to worry about because we have got a whole nine weeks before we play the mighty Barcelona in a pre-season friendly.

We set about removing 20mm of the top with the wonderful Koro Field Topmaker supplied by Mallinsons.
By 4pm my beloved pitch was outside the stadium in the car park. Today we have applied 300 tonnes of medium-fine sand. Hopefully tomorrow we will power harrow the sand into the top 100mm of the pitch, weather permitting!

I will keep you all posted on our progress as soon as I get time to turn the old p.c. back on.

Best of luck all you fellow groundsmen out there professional or otherwise.