by External source
in Industry News
on 27 Apr 2013 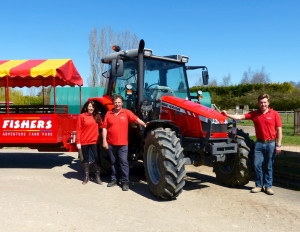 A Massey Ferguson tractor that took part in the spectacular opening ceremony of the London 2012 Olympic Games has become a star feature at Fishers Farm Adventure Park, an award-winning family visitor attraction located at Wisborough Green, near Billingshurst, West Sussex.

Supplied to Fishers Farm through local Massey Ferguson dealer, Yeowart Agricultural Ltd, Sharpthorne, East Grinstead, the 102hp MF 5440 tractor has swapped a supporting role within the Olympic Stadium for almost continuous action seven days a week pulling a visitor-packed trailer past a variety of livestock pens and paddocks located alongside a circular route through the farm park.

Known as "The Big Red Tractor Ride", the tour - which takes between 10 and 15 minutes, depending on season - can include adult and young sheep, pigs, goats and alpacas, Shire horses, Cobs and Shetland ponies, dairy and beef cattle, hens, ducks and geese plus visiting wildfowl that may have dropped-in during the day. A recorded commentary is broadcast during the ride telling the history of Fishers Farm and the activities that now take place throughout the year on the 20ha holding. 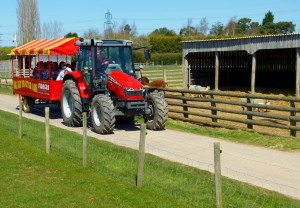 Owned and managed by the Rollings family since 1985, Fishers Farm was initially planted with soft fruit and run as a "pick your own" enterprise by husband and wife team, Tim and Trina Rollings.

A chance remark by a customer led to the introduction of refreshments and toilet facilities followed soon after by requests to see the Rollings' own domesticated livestock, events which sowed the seeds for the creation of Fishers Farm Adventure Park. The venue welcomed its first paying customer on 1 June 1990.

Today, visitors to the attraction number more than 1,000 a day during the summer months, drawn by a heady mix of exciting rides, creative and fun activities and informative animal features which provide a great day out for all the family.

"Both Ferguson and Massey Ferguson tractors were being used on the farm long before we bought the land and planted soft fruit," explained Tim Rollings. "Our first tractor back in 1985 was a Massey and we have remained loyal to the brand through to the present day, having used Massey Ferguson models for our big red tractor rides since they first began."

In autumn 2012, Tim Rollings decided that he needed a slightly more powerful tractor to comfortably tow the trailer carrying large numbers of visitors around the outdoor livestock feature attractions.

"I sought advice from local dealer, Yeowart Agricultural, and was told that the firm had acquired one of the tractors loaned by Massey Ferguson to assist at the opening and closing ceremonies of the Olympic and Paralympic Games," explained Tim. "That tractor, an MF 5440, had exactly the power output that we wanted. Its unique celebrity status made it a must-have for Fishers Farm Adventure Park and I ordered the tractor the same day."

Delivered in November 2012, Fishers Farm's MF 5440 tractor has been a huge success with visitors and the Rollings family from the outset.
The turbocharged and intercooled four-cylinder engine is quiet, economical and provides loads of torque at low engine speeds while gear changes are fast and simple thanks to Massey Ferguson's Dyna- 4 transmission which provides four clutchless gear changes within each of four different speed ranges.

"Our tractor played a part at the opening of the world's biggest sporting event," he concluded. "I am delighted that it has now taken on a very important and high-profile role within our business and is being appreciated by the thousands of people, young and old, who visit Fishers Farm Adventure Park every week."