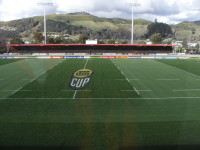 Not the sort of title that would make headlines in newspapers because it's just not interesting enough - conversely bad news sells. I am writing this before the Rugby World Cup semi-finals so I don't know what the outcome of the tournament was.

Hopefully the All Blacks won the tournament to provide New Zealanders with the perfect end to what was a fantastic event. Irrespective of the result, the New Zealand turf industry can and should be very proud of the contribution it has made to the success of the event. The fact that the industry didn't make any headlines during the World Cup means that it did an excellent job.

When I first heard of the "Stadium of 4 million" I had my doubts - I wasn't convinced that New Zealanders would get in behind the minor nations in the way they did. Happily the concept worked brilliantly - spreading the team bases, match and training venues as far and as wide as possible was without doubt the key to getting so many New Zealanders genuinely engaged in the event.

Training venues were located through-out the length and breadth of New Zealand - from Kerikeri in the Far North, across to Gisborne and all the way down to Invercargill. Training venues were located in 24 towns or cities with over 40 different sites used for training. Initially there were 13 match venues but unfortunately this was reduced to 12 following the February earthquake in Christchurch.

Clearly one of the challenges with having so many match and training venues would be achieving a suitable minimum standard and good uniformity of playing surface quality across all of the venues. To assist with this, in the early stages of planning for the event, the RWC organisers engaged NZSTI to develop detailed specifications for the quality of the playing surfaces to be provided at both the match and training venues.

Specifying these standards was instrumental in achieving a high standard of playing surfaces seen throughout the tournament. Venue owners had to consider the state of their pitches to determine what would be required to achieve the standards. In a number of cases it was apparent that an up-grade of the existing pitch would be necessary to ensure that the required standard was met. In others, just some fine tuning of maintenance programmes was all that was required.

Further to that, the RWC put in place venue monitoring processes to ensure that venues remained on track to provide the quality of surfaces required during the tournament. The end result was high quality playing surfaces and no headlines for the turf industry.

The high standard of pitches presented during the tournament is a tribute to all concerned and looking at old footage it is apparent how much progress has been made since the tournament was first staged here in 1987. Irrespective of the weather, muddy conditions are a thing of the past at all major venues in New Zealand and the public expectation is for nothing less than that. The pitch reports from the sideline commentators are pretty much redundant - "Pitch conditions are perfect" is all they ever had to say.


In addition to the high standard of pitches provided at all of the match venues, there are a couple of venues that are at the forefront of sports turf technology globally and both performed with distinction during the tournament. The permanently covered pitch at Dunedin's fantastic new stadium is a world first and all involved can be very proud of the result. The sand carpet pitch at Trafalgar Park in Nelson is constructed from recycled glass sand which is another world first. In each case, the venue owners were taking a risk by using this new technology and the results show that the risks were worth taking.

So once again, the turf industry in New Zealand should be very proud of what was achieved at RWC 2011. This good news story is not going to make any headlines but it is a significant achievement that is based on the world class capability of the many people involved in the New Zealand sports turf industry.