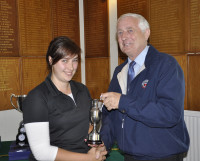 In windy conditions, making the links at Felixstowe a tough challenge, Blaize Esmond of Otley College scored a gross 77, nett 74 to secure the Girls' championship from runner up, Alice Barlow of Great Cornard Middle School, who scored a gross 87, nett 77 and who also won the Girls' Under 16 title.

Forty-five boys and 10 girls, all with handicaps of 12 or less, represented a record number of 24 schools across the county at the invitational event, which featured winning students from the regional heats held during the summer at Haverhill, Finn Valley and Diss golf clubs.

Commenting at the presentation of the awards, David Wright, Chairman of the SSGA said, "The standard of play this year was of the highest order, especially when you take into account the strong winds that blew all day. The course was in excellent condition and I congratulate not only the winners of the respective competitions, but also all of the competitors for their exemplary attitude and conduct throughout the day.

All are a credit to their schools and the clubs they represent. I would also like to thank Ransomes Jacobsen and E-Z-GO for their continued support of this championship. They are a significant local company and have sponsored the championship for many years now and, we are indebted to them for their help."