The winners of the much coveted 2009 Pitchcare Neil Wyatt Racecourse Groundstaff Awards have been announced.

The Award for the best Flat racecourse was awarded to York Racecourse. The Dual Purpose award went to Newcastle Racecourse and Plumpton Racecourse received the award for best Jump track.

Members of the Judging Panel also had the opportunity to praise the considerable efforts of the AWT Courses in continuing to stage racing during the recent bad weather.

Judging of the awards took place on Tuesday 19 January 2010 and the panel comprised representatives of the National Trainers Federation and Professional Jockeys' Association, with support from the BHA Course Inspectors. The Awards, organised by the Racecourse Association, are in their fourteenth year and recognise the achievements of racecourse groundstaff.

John Richards, Operations Director of Pitchcare commented, "We are delighted to sponsor these prestigious awards. Groundstaff at racecourses are highly regarded in the sports turf industry, their work is critical to the safety of the horses and jockeys and, as such, the ongoing success of the sport. 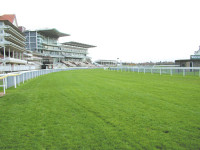 Richard Linley, Senior BHA Inspector of Courses, said: "It is encouraging that each year it gets more difficult to select winners. 2009 saw some really pro-active displays of groundsmanship in what was a particularly difficult year for many racecourses due to the high rainfall. It is a shame that we can only recognise three courses in these awards as there are many other deserving teams."

Rupert Arnold from the National Trainers Federation said: "As usual, the awards were fiercely fought over and the panel had a tough job separating the nominations. There was particularly strong competition in the Flat section with several courses deserving winners in any other year but York outstanding. The commitment of groundstaff to high standards around British racecourses is commendable."

Dale Gibson from the Professional Jockeys' Association said "It was great to see areas of the sport from the other side of the fence. The racecourse nominations contained detailed analysis which we debated hard. There were a number of very strong submissions. York racecourse had an outstanding season in 2009 and thoroughly deserved the award for the consistency of racing ground following their massive drainage work over last winter and spring. The whole team worked together to ensure confidence returned to the Knavesmire."

William Derby, Clerk of the Course and Chief Executive at York said, "I am truly delighted for our hard working team here at the Knavesmire and we are honoured to be recognised with such a prestigious award. Led by Adrian Kay, our Head Groundsman, the team have not only completed one of the largest track projects seen on a British Racecourse, they have learnt new skills, mastered new pieces of equipment and put in that extra effort to deliver a racing surface that witnessed some extraordinary performances from horse and jockey last year. They deserve great credit and we are very proud. Throughout the trackworks project we received great support from trainers, jockeys, our contractors and our turf consultant. This award is a tribute to a large number of people who have invested their time, expertise and effort in developing the racing surface at York and I would like to thank and pay tribute to them."

James Armstrong, Clerk of Course at Newcastle Racecourse, which won the Dual Purpose award said, "We are honoured and delighted to have been given such a prestigious award. It is a testament to the unfailing dedication of the groundstaff here at Newcastle Racecourse and I would like to thank them for all their hard work, which has seen them battling against the elements time and again to ensure that we have the best possible conditions for racing".

Mark Cornford, Clerk of the Course said "We are thrilled that Plumpton's efforts have been recognised in these prestigious awards named in honour of Neil Wyatt. Neil was a great supported of racecourses such as ours and gave us tremendous encouragement during his tenure as Senior Inspector of Courses for The Jockey Club."

Winner: York Racecourse The Judging Panel commended the exceptional work undertaken by the groundstaff team at York, lead by Adrian Kay. In particular they recognised the professionalism, level of investment and detailed communication undertaken by the racecourse to ensure Owner, Trainer and Jockey confidence.

Winner: Plumpton Racecourse Mark Cornford and his small and enthusiastic team were congratulated on the significant level of improvements which had been undertaken over a period of years, particularly to drainage which has reduced the number of abandonments.

Runner Up: Taunton Racecourse The Judging Panel recognised the significant physical improvements to the racing surface and associated buildings including the widening of the home straight. The proactive approach to improve the ground and schedule of fixtures was applauded.

Winner: Newcastle Racecourse The Judging Panel was pleased to reward the significant investment in drainage and general improvements to the racing surface. The Panel was conscious of their concentrated fixture list for flat and jump and that rail movement was optimised both between and during race meetings to provide fresh ground.

Runner Up: Chepstow Racecourse The general improvement in standards throughout the racecourse was recognised by the Judging Panel who commended the considerable investment in drainage which has significantly improved ground conditions.