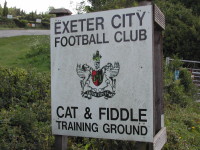 Exeter City FC's training ground has been extensively renovated by Speedcut Contractors of Oxford to keep it playable all year round.

Head groundsman Clive Pring, who has been at the club for three years, called in Speedcut after Exeter was promoted to League One - their second promotion in two years.

"Speedcut have done a great job," says Clive, who was previously at St. Peter's School, Lympstone, for four years and at Woodbury Park Golf Club for eight years.

"The training ground is on similar clay soil to the main St. James stadium and needs to be well-drained for all-year round training use by the main team, the under-18s and for nine to 16-year-olds using this as our Centre of Excellence."

Exeter City FC supporters are revelling in the club's promotion twice in two years (from Blue Square Premier to League Two and now League One) - made even more significant in that supporters own the club themselves through a trust.

The main St. James ground has been on the same site, a former pig farm, for 105 years and is now a stadium seating around 4,000 with standing room for about 5,000. 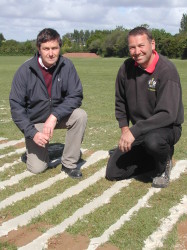 "We have an excellent working relationship with Clive," says Kevin. "The Exeter training ground is a marvellous facility and we had a team of four working on the pitches for around two weeks. I am delighted Clive is pleased with the work."

The Exeter training ground, known as the Cat and Fiddle Ground because of the nearby pub, has been the training ground for 30 years and was previously owned by Exeter University.

It is close to Westpoint, the Devon County Show ground, and is in constant use.

Clive has one full-time and one part-time groundsman at the main stadium and one full-timer at the training ground, rising to two in the summer.
"We have a lot of demands on the ground but the constant maintenance involves plenty of aeration and keeping the soil structure open," he says.

At the main stadium Clive uses a Wiedenmann aerator to keep the surface open and does plenty of sand topdressing. But the site itself underneath is the same as the original soil.

"It takes plenty of work to keep the stadium surface in good condition," says Clive. "I believe in doing a lot of scarifying and topdressing out of season and plenty of brushing and aerating during the season, and the results are excellent.

"We pride ourselves on using science in everything we do on both the main ground and training surfaces." 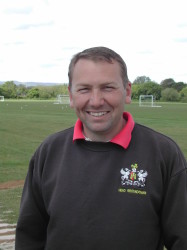 As a former greenkeeper and school head groundsman, Clive has worked on every type of playing surface and is a keen advocate of training, being an IOG (Institute of Groundsmanship) member and formerly with BIGGA (British and International Golf Greenkeepers' Association).

"Groundsmanship today involves a great deal of know-how and it is important to stay in touch with all the developments in seed, products and maintenance methods," says Clive (40) who lives in the nearby village of Aylesbeare and originally comes from Exmouth.

He got into greenkeeping via a head greenkeeper mentioning a job vacancy at Woodbury Golf Club while he was supplying office stationery.

"It sounded a good deal more interesting than what I was doing and I've never looked back," says Clive.

"The club getting promotion has been a major lift for everyone and being head groundsman of a successful club is very rewarding."