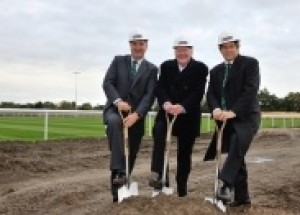 London Irish are now exactly six months away from moving into a brand new £12 million training complex that the club hopes will help to improve their fortunes both on and off the field.

And, whilst the new Croysdale Avenue site in Sunbury-on-Thames is less than a mile away from their current training ground at The Avenue, Running Rugby has learned that it has been a very long journey with a number of obstacles to overcome.

The Exiles began contemplating the construction of a new training facility nearly eight years ago in 2006 and some of the clashes with local residents over the plans since then have been well publicised.

The Secretary of State was even involved and Chelsea Football Club had already had a planning application for the same site rejected and subsequently turned their attention to Cobham, so to say it has been a challenge to get to this point would be an understatement and London Irish CEO Andy Martin explains how proposals had to be altered and fine-tuned to make the move possible.

"It is where Chelsea tried to go before they went to Cobham. They failed because they were trying to lock it down and make it a much more secure site where there would be games being played. Ours is a much more open, inclusive community site.

"Over the last 10 years we have come up against so much opposition it has been unbelievable. The facility is bang in the middle of Sunbury-on-Thames, which is quite a parochial area, and for us to do anything was always going to be very difficult. 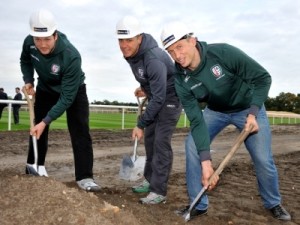 "It was quite an unusual situation where the opposition happened to be members, so you find yourself in a situation where the parents of a lot of the kids playing for the amateur clubs were trying to stop us from doing what we needed to do to grow to accommodate more kids. So there was a lot of community stakeholder work that had to be done before we got anywhere near thinking about the design."

The design was obviously integral to whether the project would eventually be accepted by planners and residents alike though and John Roberts from AFLS+P Architects, who were responsible for the designs and also worked with Chelsea on plans for the same site, says the history of previous objections to proposals for the site did make things difficult.

"We actually worked with Chelsea on their first application [at Sunbury] and I think the main issue they had was that they were also looking to play reserve games there and that could attract crowds," he said.

"It didn't actually help London Irish with the history of that sort of use being proposed attached to the site.

"We inherited an outline application, which had a fixed area with a fixed height in a fixed shape.

"The proximity to residential areas has the positives of being able to draw in the local community use but it also has the negative of drawing some opposition in terms of the planning application."

The new 53-acre site is four times the size of London Irish's current training facility and will feature 17 pitches, including a 3G pitch that is approved by both the IRB and UEFA. The clubhouse will be state-of-the art, as you would expect after a £12m investment, but Martin says the result of the planning process means it is no larger than the golf club and driving range that it is replacing.

"The volume on the building is exactly the same as the building that we have taken down. It was a golf club and a driving range…all we have done is straighten it out and we have only been allowed the same height and the same width," he said.

London Irish will make the move to the new site in June in order to coincide with two growing seasons and Martin says it is "very important" to ensure that the pitches are as good as they possibly can be.

"There are lots of stories out there about people who have played on pitches too quickly and they have been destroyed, so we won't make that mistake," he said.

"It is amazing how quickly the pitches come out of the ground. This was a golf club and now if you go down there, you'll see it is levelled off, the pitches are in great shape already, the 3G pitch is down, the main pitch is being built and we've got players who want to go and play on it already."

The financial details of the sale of The Avenue to housebuilder and London Irish sponsor Crest Nicholson but it will certainly have been sold for a considerable profit on the £1,280 the club paid for an 11-acre site in 1931.

The cost of the new Croysdale Avenue site has not been released either but the club has had to make various commitments, such as making £1.5 million available for affordable housing in the local borough and £600,000 for education facilities in Sunbury.

The club has received no grants or funding assistance for the project thus far and the fact that planning permission was finally granted to build a significant number of large houses, which will no doubt be extremely valuable and in great demand, on the old site was the key to the financial viability of the move.

"The bottom half of the site will become a gated, high quality residential development. There are 200 houses that we can get on the complete site and they will be four or five bedroom houses. Four to five bedroom houses within the M25 is quite a feat these days so that has been very attractive for the developers," Martin added.

"That has been the jewel in the crown and that is what has enabled the value to be released for us to invest in the site."

The Avenue can only be officially sold once work has been completed at the new site and the club has moved as planners don't want two large developments taking place in such close proximity.

The end of the saga is well within sight though and, whilst Martin admits that the club could have pulled out of the project during the tough times and that it has had a negative impact on the field, he is looking to ensure that the new facility is used as a training base for the 2015 Rugby World Cup and believes that the financial future and playing prospects for London Irish are now looking bright.

"There were a lot of times when we could have stopped doing this because everyone seemed to be against us for a long period of time. It got quite personal against the club and against individuals, incentives and motives were being questioned," he said.

"If you look at what has happened to us on the field while this has been going on, we have had to just plateau and focus on getting things right and then look to invest as we go forwards. We can't wait for June. June gives us some money and it gives us the flow because things start to happen and hopefully we can get back to the core product.

"We are working with England Rugby 2015 now to make sure that when visiting teams are coming over looking for training venues, this is hopefully going to be one of the prime training venues for the international sides. It is close to Twickenham, all of the facilities are very close by and that will give us an accolade that we would like and would help to show off what we have got."