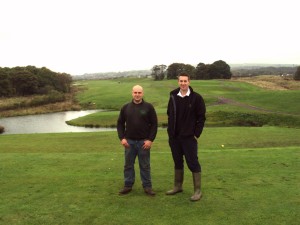 Constructing new golf holes during the worst summer on record and the coldest spring for 100 years handicapped but did not deter the ambitious owner of a Bolton golf course.

Indeed to see the roughs, fairways and greens now at Regent Park Golf Course it is hard to imagine the obstacles overcome.

All four new holes were sown from seed using bespoke mixtures from British Seed Houses. Greens consisted of traditional Bent/Fescue but with higher percentages of AberRoyal Bent than fescue as that is the species that will flourish here.

Dwarf ryegrasses Escapade and AberImp, which are exclusive to British Seed Houses, were used in high proportions on tees, fairways and roughs due to the future traffic issues and low inputs.

The company's technical sales representative Paul Moreton provided specialist knowledge, advised right from the planning stage and acted as agronomist for the scheme.

The holes were ready in summer 2013 and the public's response has been superb, explained managing director Robin Day. His company has invested more than £2 million in the course since taking it over from Bolton Council ten years ago.

Following the improvements to the main course, the provision of a new clubhouse and a driving range, the next development will be a nine-hole pitch and putt family course. It is due to be built to open in spring 2014.

Robin said: "It was important to invest to produce facilities which would create a model for future golf provision and attract more people to the sport, including juniors and families."

The 18-hole course, which was built in the 1920s, was let down by four of the holes on a floodplain by the railway line. The solution was to turn this area into a nature reserve, redesign the course and move these holes to new land provided by the council.

This new land, also low lying, had to be built up with inert fill. The wait for this building material and the slowdown in the economy meant the scheme - designed by renowned designer Paul Thomas of Dave Thomas Ltd - took four years to build.

The project engineers were PSA Design and the contractor was Ruttle Construction, who moved thousands of tons of earth during the scheme.

Robin praised all the team involved in making it a reality, including Paul Moreton of British Seed Houses who was a regular visitor to give specialist advice on the right seed mixtures and nutrition required.

Robin said: "I really appreciated his expertise and advice. I could not recommend British Seed Houses or Paul more highly. He knows his subject so well. The public response to the new holes has been astonishing. it has been absolutely superb.

They are fabulous golf holes. We are carrying out a lot of tree planting this autumn and look forward to seeing how the holes mature over the coming years."

Paul said: "I enjoyed getting involved in this project from the start, right from the planning stage. I can remember our first meeting when Robin asked if it was possible to seed a new green from scratch and have it open under a year. I replied 'If mother nature plays ball, then yes'.

"All the roughs, fairways and greens were sown from bespoke mixtures, which were chosen to bear in mind the course's future budget, expectations and location.

We designed mixes to be low maintenance and hard wearing and I monitored nutrition on the greens closely as they are newly built to USGA specification, which require a very careful and precise nutrient programme.

"What followed was utter heart ache. I can't remember a week during late summer early autumn 2012 without torrential rain. All seeding was delayed and even when it was achieved we had washouts and cold conditions.

"From here on nutrient input became a major focus and without our extra training I wouldn't have been qualified to advise on this part of the grow in. In 12 months we applied roughly 12kg N per green, which was a little less than we hoped but the weather dictated this.

"All BSH amenity staff and management recently completed a three year FACTS qualification on plant nutrition which has put us ahead of the pack when it comes to giving qualified advice on many aspects of a golf course, not just the seed type. We have an exclusive range of slow release, quick release and liquid fertilisers to draw upon."

Paul added: "It's been of personal interest to me in finally getting the new holes open in July, albeit slightly behind the original date, considering there were still snow mounds on the course mid April I think we all did pretty well!

"There were tight budget restraints but that did not restrict my input. I was happy to act as agronomist and adviser and am delighted the scheme has worked so well. The weather conditions during construction certainly made it tough but the results speak for themselves. I can't wait to play the whole new course."