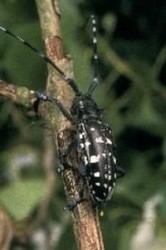 As a result of the felling programme being carried out in response to the UK's first outbreak of Asian longhorn beetle, an infested tree has been confirmed towards the northern limit of the current infestation zone. This means that the zone has been extended by a further 100 metres, requiring additional felling within the extended area.

Larvae were discovered in the tree concerned after it had been felled, confirming the need to fell and inspect potential host trees in the infestation zone. Survey work to date has confirmed that 65 trees in the zone have been found to be infested, and more than 1300 infested and potential host trees have been felled. Removal and incineration of trees from the extension area is expected to begin this week. The felling operation in this area should be complete by the end of June.

The most recent findings were young larvae (grubs) which would not have reached the stage by this summer when they could develop into adult beetles and fly off into the surrounding area. It also suggests that the eggs were laid last year, rather than earlier, supporting the view that the tree is close to the limit of the infested area. This means that there remains a good chance that the outbreak can be contained and eradicated, although further survey work will be necessary to confirm the position.

In the meantime, anyone who suspects they have seen an Asian longhorn beetle or evidence of its presence must contact the Fera Plant Health Helpline 0844 2480071 or email planthealth.info@fera.gsi.gov.uk. If possible, the beetle should be caught and placed in a secure container for collection by an inspector. The beetles are not harmful to humans, although they should be handled with caution because they can nip the skin.