When Alan Magee, Course Manager at Knighton Heath GC, upgraded his existing Wiedenmann Terra Spike, he simply chose a wider version thanks to having a bigger tractor. 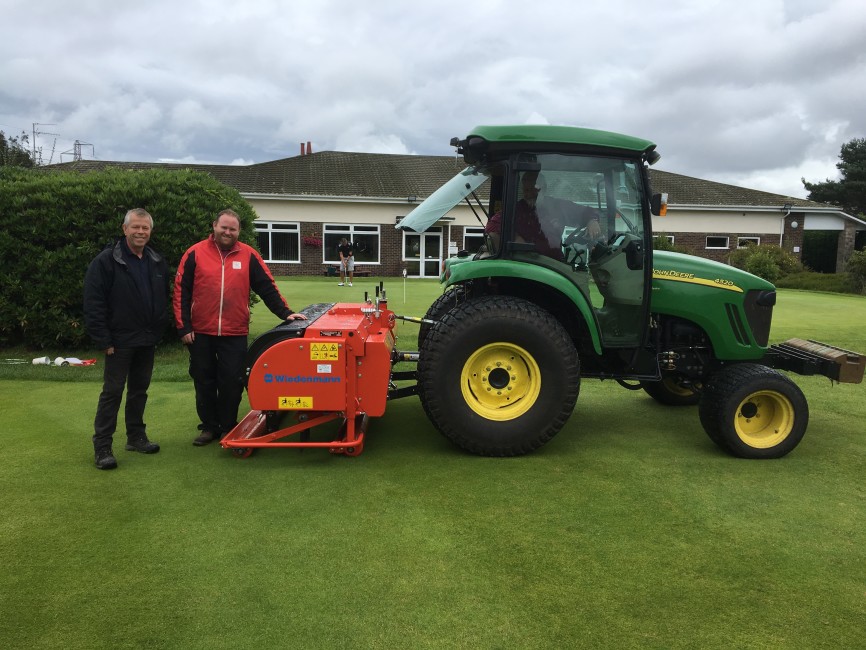 The Bournemouth club enjoyed the excellent service of its GXi 6 which had been both nimble and quick. However, in August a switch was made to the 1.8 m wide GXi8 HD, hoping those crucial extra 40 cm would make the operation even more efficient.

After full course circuits in August and September, Alan Magee couldn't praise his new Terra Spike highly enough. "On its first outing it got round all 18 greens and the putting green in seven hours when previously the narrower machine took 12. The tees and approaches were virtually done in a day, just spilling into an extra hour the following morning to finish the final two. Time saved there was six hours - even using the 22 mm tines. "

Fewer passes and turns speeded up the whole process but didn't detract from the neatness and negligible disturbance.

"We're very pleased indeed. The machine is quiet, smooth and exceptionally balanced. During the playing season on the greens we'll use 10 mm tines and 12 mm in the winter, with tees and approaches the 22 mm."

At the same time Alan Magee and his team of six also took delivery of a Whisper Twister, Wiedenmann's all-action blower with 180* of swivel and an airflow rate of 200 m³/minute.

"Can't fault that one either," he said. "Primarily it's for managing the broader leaves and then later in the season the pine needles. Every day we find more tasks. Last week we cut the rough and scarified the fairways. Tidy up would normally have involved four people with back pack blowers. But after letting it dry a little we followed through with the Whisper Twister which required only one person on the tractor, again making everything more efficient."

On hand throughout the sales process was, Andy Frost, grounds care specialist from Wiedenmann dealer, EG Coles at Shaftesbury.