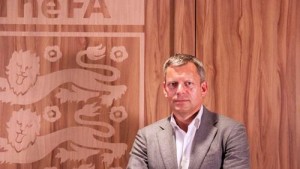 Speaking at the Soccerex Global Convention in Manchester yesterday morning (9 September), Glenn said the FA is undertaking a reorganisation which will refocus efforts to grow the game at community level.

"Delivering that reorganisation was part of the brief I was brought in on," said Glenn, who took up his role at the FA five months ago (18 May).

"Over the past two years or so there has been a realisation that we need to spend much more on grassroots facilities - and more specifically, to increase the number of artificial pitches.

"When it comes to artificial pitches, we are way behind other northern European countries with similar climates."

"We're in a situation where English kids play on quagmires for two months - which means that conditions benefit strong kids rather than skilfull kids.

"Part of the reorganisation is to spend less on backroom staff and start spending more on people delivering football."

Glenn, 54, was named the FA's new CEO in March 2015 and took up his role in May after leaving his previous role as chief executive at United Biscuits - a £1bn company which owns the McVitie's and Jacobs brands.

An FA qualified grassroots coach, Glenn is also a former Leicester City FC non-executive director, having sat on the Club's Board between 2002-2006.