by Football Foundation
in Synthetics and Football
on 26 Dec 2019 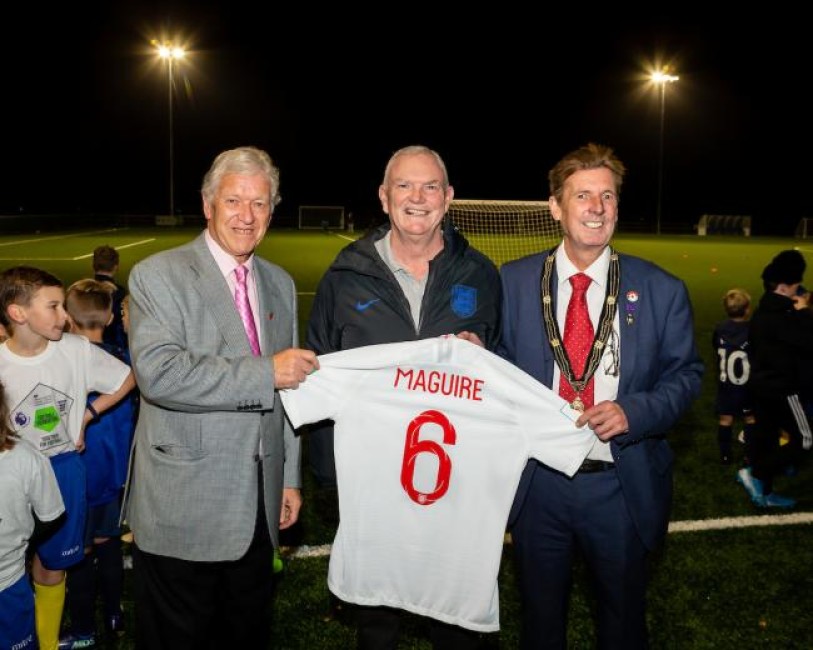 FA Chairman Greg Clarke hands over one of his prized possessions - a signed Harry Maguire shirt - to Ascot United, saying: "You deserve it more than I do"

Greg has been Chairman of The FA since September 2016 and was on-hand to open the floodlit all-weather pitch, which was made possible thanks to investment from the Premier League, The FA and Government's Football Foundation. Additional funding from the Premier League through the Football Stadia Improvement Fund (FSIF), the sister organisation of the Football Foundation also contributed towards the project.

The funding has enabled Ascot United FC, who play in the Combined Counties League at Step 5, to provide a facility which can be used for matches and training all-year round, in any conditions. The new 3G pitch also sits alongside a changing pavilion which were funded by the Football Foundation and FSIF in 2009.

In recent years Ascot United FC have been forced to use several locations for training and matches due to the limitations of the Racecourse Ground pitches and the club even has a backlog of 60 children on waiting lists to join a team.

The funding has provided Ascot United FC with a facility which will enhance and develop football provision for over 1000 people in the local community. It is estimated that over 400 additional people will start playing affiliated football at the club as part of 22 new teams formed during the next five years thanks to the new pitch.

Mike Harrison, Chairman of Ascot United FC, said: "Thanks to funding by the Premier League, The FA and Government's Football Foundation, the Royal Borough Windsor and Maidenhead and the club itself we now have a fantastic new facility. We must also thank our landlords, Ascot Racecourse for their support for the project from the outset and our directors and members who helped in so many ways.

"The 3G will benefit all our players who will be able to play matches and train on a first-class surface. It will also benefit the wider community as other teams and clubs are now able to use the local artificial surfaces that we have now vacated. This has been a long time coming but was well worth the wait."

Peter McCormick OBE, Chairman of the Football Stadia Improvement Fund, said: "It's fantastic news that Ascot United FC has been able to build a new 3G pitch adjacent to their home changing pavilion, with help from Premier League funding. The pitch will undoubtedly support an improved experience for everyone associated with the club and hopefully help to encourage many more local people to play football."