The quality and availability of pitches is the biggest factor in how often people in England play football, says the biggest grassroots survey ever conducted by the Football Association. 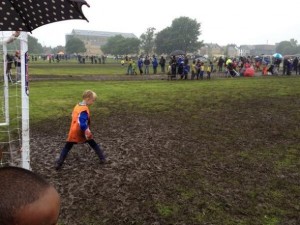 More than 28,750 players, coaches, referees and volunteers replied to the poll, which also highlighted concerns about the standard of coaching.

But 75% aimed to maintain or increase their involvement next season.

The FA will invest a record £260m into grassroots over the next four years.

"Addressing the problem of poor quality facilities is one of the areas where we have earmarked significant additional investment," said FA director for participation and development Kelly Simmons.

She told BBC Radio 5 live that introducing new all-weather 3G artificial surfaces, particularly in cities, was "integral into everything we want to achieve".

More than half (52%) of respondents said football is the most value-for-money sport to take part in - beating cycling (36%) and running (32%).

According to the latest Sport England survey, 1.9 million people take part in football each week, but the FA lost £1.6m of public funding after a drop in participation figures in 2014.

How bad are amateur pitches?

About 83% of amateur football matches take place on council-run pitches, which the FA has previously said are in an "abhorrent state".

The FA wants to bring the number of all-weather 3G artificial surfaces in line with some of its European counterparts.

Part of this will come under the 'Parklife' scheme which will see the creation of 'hubs' in cities, a scheme which is being piloted in Sheffield. FA chairman Greg Dyke said last year that grassroots football was in a "degree of crisis".

He pledged a 50% increase in the total number of full-size, publicly accessible 3G artificial grass pitches across England, to more than 1,000.

When it comes to coaching standards, the survey revealed high satisfaction ratings among youth players (aged 10 to 15). However, satisfaction falls among older players.

The poll also revealed some concerns about the cost of coaching.

The average price paid for a Level 1 coaching qualification in the last 12 months was £90, with a Level 2 course costing, on average, £208.

Approval ratings among female players about pitch availability and quality, changing facilities, refereeing and coaching standards are higher than in the men's game.

FA chief executive Martin Glenn said: "The scale of the response demonstrates the level of commitment that exists to improve the grassroots game and reminds us - if we ever need it - who we are representing and what we are striving to achieve.

"There are lots of positives, we are listening and ready to act where needed."

Key statistics from the survey