0 FA Groundsman of the Year Award

The FA's Groundsman of the Year is now in its 11th year, and the nomination period is open 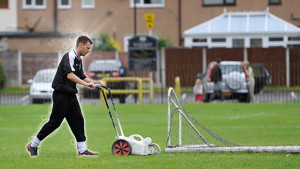 The majority of football in this country is played outside the Football League. Quality pitches are therefore essential for the development of football at every level. Grassroots groundsman, the vast majority of whom are volunteers, play a huge role in ensuring pitches are in their best possible condition, week in, week out. The Awards were set up to recognise the contribution of these 'unsung heroes', who work in all weather, all year round, to make sure that thousands of matches can take place on a high standard of playing surface.

The current award structure is as follows. There are separate awards for:-

The six judges are all Groundsmen at Premier League and Championship football clubs across the country. They not only look at the quality of the pitch, but also take into consideration the Groundsman's skills and knowledge, their ambitions for the pitch, the resources available, how often the pitch is used, and the amount of time they are able to work on the pitch.

The winning Groundsmen in each category are presented with a trophy at their respective home grounds on the day of a pre-season friendly or league game and then are recognised again at an Awards Night. The Groundsman of the Year Awards Presentation brings together all the award winners, runners-up and highly commended groundsman for a day at St. George's Park which includes lunch, a tour of the facility and the awards presentation.

To nominate a groundsman for your area, download and fill in the nomination form below and return it to your respective County FA. Each county has a different nomination deadline, so be sure to check on the FA website.