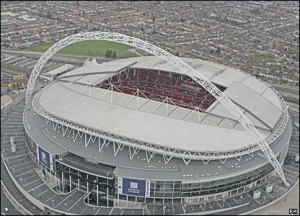 The FA's chief executive, Martin Glenn, said he would support clubs using the 90,000-seat arena in those circumstances.

Chelsea may have to vacate Stamford Bridge for at least two seasons if their £500m plan to increase capacity to 60,000 comes to fruition. Tottenham expect to spend the 2017-18 campaign away from White Hart Lane as they build a ground that will also host NFL games. Both clubs are interested in a temporary relocation to Wembley.

"I won't comment on clubs but if that's an opportunity then we will follow it," Glenn said. "We are there to provide help. We can run the FA for less costs and we can raise more. There's a range of things. It's primarily a football stadium, football matches are more profitable to run than concerts and other things.

"We are the national stadium and seeking to use it more is what we are all about. We have an obligation to football. I'm not talking specific clubs but it's in our interest as an association for clubs to redevelop their grounds, make superb facilities and if it's possible to help them in that transition by using Wembley, we are absolutely supportive of that."

The Premier League would give the go-ahead for Chelsea and Spurs to share Wembley for a season but would not allow a club to play home league matches at more than one stadium in a season.