In recent days, members have been asking questions about Fusarium patch in turf, it seems to be quite prevalent at the moment. This is partly because the weather has been wet recently and also quite mild.

This disease seems to becoming more persistent in fine turf situations. Anyway to help you all understand a little bit more about the disease, here's some information on its life cycle and control methods 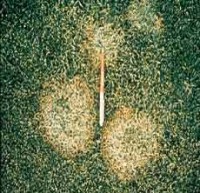 Fusarium patch is often seen during the late autumn / winter months when cool and wet weather and moist surfaces persist. The pathogen can be active across a broad range of cooler temperatures. Identification of the disease is relative easy with the turf grass having, irregular tan /orange coloured shaped spots of damaged or necrotic grass varying in size 20-350mm with a pale pink / white colour mycelium. Seen when the disease is active. Initial symptoms are seen as small brown spots, which will rapidly enlarge and cause scarring of the turf when conditions are favourable. These scars will be difficult to heal and repair during the winter months, so early recognition and treatment is important to reduce scarring of the turf surface.

All mature amenity and sports turf containing the following grass species will be susceptible to an attack of fusarium.

With Poa species being the most commonly attacked however this grass is able to recover easily after an attack because of its seed bank presence in the soil. The above grasses are used in most sport turf situations including Golf, Bowls, Cricket, and winter game pitches.

Fungus spores can remain viable for up to 2 years; survive temperature, as low -20°C This fungus is severe when soil pH is high around and above pH 7. (Increase in soil alkalinity). Fusarium patch spores (sclerotia) and (arthroconidia) are spread by wind, water, and by traffic, It is during periods of mild cool wet weather and heavy dews that an outbreak of disease takes place. Attacks appear during late autumn through the winter. These spores germinate into mycelia, infecting new plant tissue (pale pink and white mycelium), which can be seen around the edge of the patches, indicating that the disease is active.

Turf grass is susceptible to disease attack when damaged or under stress and when the soil surface remains wet during prolonged periods of wet cool weather. In severe infections, the fungus may penetrate as far as the crown, but will usually not kill the plant. If the plant does die, it is more likely from subsequent winter injury or another cause. Infected turf will recover when the plant becomes more active in the spring and is able to produce new healthy leaves restoring its vigour and colour.

The fungal pathogen has a disease life cycle which continues when conditions are favourable, understanding this cycle will enable you to understand how the pathogen can be controlled by effective management to break the cycle of disease.

Keeping the sward healthy and reducing the conditions that favour this disease will be the first priority to keep this disease from your turf the following actions should help you achieve this.