by Laurence Gale MSc
in Consultancy
on 02 Mar 2004

0 Facts about Leaf Spot and Melting out Disease

Facts about Leaf Spot and Melting out Diseases on Turf

Leaf spot diseases are very common and wide spread both in the UK and Western European countries. To help understand a little bit more about these diseases, here's some information on the disease life cycle and control methods.

Leaf spot and melting out diseases are common on most sward situations. The disease usually shows when the sward is under stress and when the right weather conditions prevail. Both diseases occur when dry weather alternates with cloudy, wet periods and during cool to moderate temperatures. The turf is also vulnerable when it becomes stressed, usually resulting from excessive nitrogen and water applications or when the grass is mown short and is in shade. The disease is easily spread by wind blown and rain-splashed spores. Dormant and active pathogens are able to survive for long periods among infected debris found in the thatch layers of the turf.

The following conditions will favour and provide the right environment for disease attack:

The symptoms will vary depending on the extent and severity of the attack, which is usually defined by the type of casual fungi pathogen involved. There are several species of fungi that initiate leaf spot and melting out symptoms and were originally classified under one single genus Helminthosporium. However three main fungi pathogens have been identified as the main cause of disease. Bipolaris spp and Curvularia spp fungi cause symptoms that are seen in the leaf structure (leaf spots and streaks) and the other Drechslera spp a species of fungus that attacks the crown and root system causing the most damage (Melting out).

The first symptoms are seen as small leaf spots, having purple and black specks seen on leaf blades. Melting out starts as a leaf spot, then works its way to the plant base and attacks the roots and crown.

All mature amenity and sports turfs containing the following grass species will be susceptible to an attack of leaf spot and melting out diseases.

However, Poa species are particularly susceptible, especially Poa pratensis that can encompass severe die back when infected (known as melting out). The other pathogens, Bipolaris spp and Curvularia spp fungi, are mainly responsible for leaf spot damage on cool season grasses. There are a number of resistant turfgrass cultivars available, so susceptible cultivars should be avoided.

Turf grass is susceptible to disease attack when damaged or under stress and when the soil surface remains wet during prolonged periods of wet cool weather. Leaf spots are most noticeable in spring and early summer. Infection in the crown of the plant during the summer can lead to the death of plants (thus "melting-out"). Cool, wet weather during spring, followed by drought, during the summer accentuates the damage from this disease.

The Pathogens that cause these diseases are always around and often laying dormant in the thatch layers waiting for the ideal conditions to become active. Once these spores are activated and have found an acceptable host they are able to grow and reproduce themselves, spreading new spores and infections to other areas of turf. This cycle continues whilst the right conditions prevail.

Spores are spread by wind, water, and by traffic. It is during periods of fluctuating weather, particularly changes in temperatures, that an outbreak of disease takes place. Attacks can appear at any time of the year. These spores germinate into mycelia, infecting new plant tissue (white mycelium), which can be seen around the edge of the patches, indicating that the disease is active.

The fungal pathogen has a disease life cycle which continues when conditions are favourable. Understanding this cycle will enable you to understand how the pathogen can be controlled by effective management to break the cycle of disease. 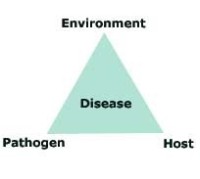 The disease triangle is a concept of plant pathology. And is based on the principle that disease is the result of an interaction between a host, a potential pathogen, and the environment or weather conditions. Plant disease is prevented by elimination of any one of these three causal components.

Keeping the sward healthy and reducing the conditions that favour this disease will be the first priority to keep this disease from your turf. The following actions should help you achieve this:

There are a number of UK approved fungicides that contain iprodione that can be used for treating Leaf spot and Melting out. All should be applied in accordance with manufacturers recommendations, product data sheets and COSHH regulations (Control of substances hazardous to health).