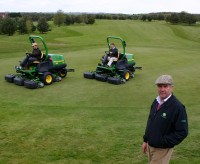 A golf centre in the north-east of England has developed its own, possibly unique, approach to golf course mowing by using John Deere's new 8000e E-Cut hybrid fairway mowers on the greens.

Denis Craggs is the founder of the 45 hole Knotty Hill Golf Centre at Sedgefield, near Stockton-on-Tees in Co Durham. Denis' approach to golf course maintenance is about maximising productivity and minimising costs. This has led him to employ a highly mechanised regime that now uses two John Deere 8000e hybrid fairway mowers to cut all 45 greens, and two sets of linked 365 trailed gang mowers to cut the fairways.

The primary mowing takes place every Monday, when the course is closed for the day, and the same number of staff now maintain the course as they did when the first 18 holes were opened in 1992.

"By using bigger machines and with a whole day free of play, we can operate in a totally different way," says Denis. "We can cut more grass in a quarter of the time it used to take, and just go out early in the morning and late at night during the rest of the week, without disturbing play. The system works perfectly for us, and the difference is incredible. We're now cutting, at the height of the season, 1500 acres of grass a week, on a 540 acre site, with massive savings in fuel and man hours."

Supplied by John Deere dealer E A Clayton of Stockton-on-Tees, the new lightweight 8000e machines, equipped with 11-blade 46cm (18in) cutting units with groomers, have effectively replaced seven ride-on triplex greens mowers altogether, and were specifically bought to cut the greens rather than the fairways.

"I attended last autumn's John Deere Golf Roadshow, where the new 8000e mower was demonstrated along with the new Quick Adjust cutting heads," says Denis. "We then had a machine for a weekend to evaluate it, looking at height of cut, weight and maintenance requirements in particular, and we couldn't find a thing against it, it's proved to be exactly what we needed.

"We've had no problem using it on the greens at all. It's a bigger machine than a triplex greens mower, with smaller cutting heads, but it's more manoeuvrable and has a wider cut, with five heads per machine instead of three. Also, it runs at just 1500rpm, which makes it quieter and more pleasant to drive, and with its three wide tyres it doesn't mark the greens at all. The hybrid technology cuts fuel consumption and there are no oil problems - it just ticks all the right boxes for us.

"We can now do all 45 greens in between two and three hours with just two men. With seven triplex ride-ons, it would take one man all day just to adjust the cutting heights - we could never go back to that system now. On cutting the fairways and greens alone, we've now more than halved our fuel costs.

"In addition, with the gang mowers towed by John Deere utility tractors, which give us an overall working width of over 9m (30ft) on each machine, we can cut all the fairways in half a day with just two men, which is a huge time saving. It's all about increasing productivity, cutting fuel consumption and saving time - with 45 holes and a very busy course, we have no other option if we want to get these jobs done in a timely fashion."

Denis Craggs is pictured (right) with the two new John Deere 8000e hybrid fairway mowers cutting one of the greens at the 45 hole Knotty Hill Golf Centre in Co Durham. The mowers are being operated by Denis' son Ashley (far left) and Henry Suddes of John Deere dealer E A Clayton.