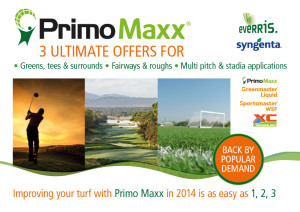 Over the course of the season…

Matt Plested, Course Manager at Muswell Hill Golf Club in North London has always looked to achieve the highest possible standards, but in attempting to keep on top of his fairway cutting he was finding that he didn't have sufficient man power to devote time to other areas of the course.

"Because it was so wet in 2012 and we'd put down a granular feed, we were cutting fairways four or five times a week and could barely keep up with them. While they looked fantastic, other parts of the course were perhaps not seeing the level of attention they deserved," explained Matt.

So this season, he chose the Total Fairway Offer from Everris which included Primo Maxx and Sportsmaster WSF Nigh N 35-0-14+0.13Fe water soluble fertilizer.

"What a difference it has made," revealed Matt. "We were immediately able to go down to cutting fairways once or twice a week. They still looked fantastic, but I was freeing up 16 man hours a week which I could redeploy to other tasks around the golf course, while I was also saving around £2,000 in fuel costs for the season."

Another benefit he discovered was that, despite 2013 being a particularly dry year with 350ml less rainfall than the average over the summer period, the fairways held their colour beautifully and looked cleaner and tidier than in the past.

"Over the summer I visited some courses with fairway irrigation and would say that we were right up there with them, when normally that wouldn't be the case and we could be burnt off."

"So in effect, the benefits have been four fold. Through the Total Fairway Offer I got a very cost effective deal, the quality of the golf course has improved, I've been able to free up staff to concentrate on other areas of the golf course, and I've saved money from my course maintenance budget."

Everris Senior Technical Area Sales Manager, Michael Fance, said: "Across the country this season we've seen the results that can be achieved by using Primo Maxx on fairways.

When visiting Muswell Hill recently I was struck by the turf quality and presentation, but it's through these additional benefits Sportsmaster WSF High N brings that Course Managers are discovering the true value it delivers."