Many head Greenkeepers and course superintendents have seen and realised the benefits of a greens top dressing programme, using sandy materials to improve the quality of the root zone both from a drainage and growing environment perspective. A story is often told of Old Tom Morris when asked what made his greens so good, he would reply "sand, mare sand and the Sabbath". Old Tom Morris was blessed with good drainage on a links site but many courses since have been built on less than ideal land.

Today some clubs have even used this top dressing strategy to create a "USGA root zone" above their existing sub-bases rather than endure the costly and disruptive processes of reconstruction. Indeed it would not be unrealistic to suggest that many older clay-based greens have been transformed through such practices and now support year-round play, a policy that would have been unthinkable in the not so distant past. Success has only been possible when suitable materials have been used with sufficient frequency (and, of course, complemented by other management treatments, particularly aeration).

The evidence to date indicates that suitable green top dressing programmes have generally been beneficial. It may be that sand top dressings could be of value in improving the intrinsic drainage characteristics of some of the poorer soils/sites to improve year-round playability, after all sand has been used as a tonic for wet conditions for centuries. Some of the high profile clubs, with the resources to match, have been top dressing fairways for a number of years now with good results. Right?

However, before committing considerable resources to an extensive programme, consider the following ten point plan. Hopefully this might help you decide if such a strategy is likely to be beneficial or, more importantly, help you decide where best to direct resources to achieve the most cost-effective solution to your problems.

Perhaps the most obvious assessment to make but one that is nearly always overlooked. Some courses may be blessed with soils that possess good intrinsic drainage characteristics or are to be found over free draining sub-strata such as gravel or fractured limestone.

Finer textured soils, particularly silts and clays, will have drainage rates that are poorer than coarser textured sands or sandy loams. The classification of the soils can either be completed in situ on the basis of a hand textural analysis or by sending representative samples to a soil-testing laboratory for a mechanical analysis. Soil types can vary significantly across a golf course and even within a single fairway.

The mechanical analysis will give some useful information as to how the soil may perform but it is also important to evaluate the structure of the soil as well as its texture. A top dressing programme is not primarily concerned with the modification of soil texture to depth although changes will occur at the immediate surface as the sand becomes integrated with the soil.

Good structure relies upon having a satisfactory blend of aggregates or crumbs as well as macro pores to allow water to move freely through the soil profile. Loamy soils tend to form good structure relatively easily, having a satisfactory range of both large and small pores. A small test hole excavated to a depth of 300-450 mm will provide some useful information on the degree of compaction, structure and intrinsic drainage characteristics of the soil. Soil that is easily dug is less compacted, will tend to be better structured and as a consequence show better drainage characteristics. Hard, compacted, fine soils will invariably have poor structure.

Under traffic and particularly in wet conditions, soils are easily compressed and destructured. These compactive forces lead to a reduction in natural drainage and poorer growth. Soils that appear consolidated but which are easily broken up and loosened will respond very well to mechanical aeration treatments, particularly Verti-Draining. The timing of the Verti-Draining operation is however crucial to success.

Thereafter, top dressing certain soils with sand can help to form a protective layer over the indigenous material thus helping to reduce the direct effects of compaction on the underlying soil.

Contouring determines how surface water will travel across the ground. On fairway turf, a greater fall is usually required to effect satisfactory water movement in comparison to close mown greens turf.

It is always useful to evaluate your problem fairways in the wettest of conditions. How much rainfall impacts directly upon the surface and how much additional water is collected from other areas of the course? It is not uncommon to find one low-lying fairway that is responsible for the collection of water from three or four higher fairways and roughs.

Mounding between fairways can deflect water and could be advantageous but equally could increase water flow and movement across localised sections of the site. Catchwater drainage can be crucial in reducing the quantities of water that can impact upon an area below mounds or higher ground and should be used where practical. The least expensive option is to construct shallow swales to deflect surface water to less obtrusive sections of the course.

Contouring can be used to good advantage but flat sites are heavily dependent upon good internal drainage to move surface water quickly in to the soil and on to depth.

Many drainage systems are installed and expected to last indefinitely yet the longevity and performance of a pipe drainage system is strongly influenced by the quality of construction. Poor drainage can arise from the failure of such systems.

Outlets, particularly open ditches, must be checked regularly and kept clear of debris and silt. Water backing up a ditch line will hinder water movement from adjacent ground, particularly if significant ground is drained to the ditch!

Old stone drains still form the backbone of many drainage systems on old courses today but these can collapse leading to localised problems. Dealing with such sub-surface problems in an appropriate manner will be a priority. Top dressing in areas with a high winter water table will have little positive impact on drainage but could be a useful mechanism to assist surface water movement to a functional underlying drainage system. The regular maintenance of slit drainage systems will necessitate the frequent application of sand, particularly during installation and in the early years of establishment.

The climate may be getting wetter but small microclimatic conditions on courses may influence fairway performance. South-facing slopes tend to be warmer and will lose more moisture through evapotranspiration. Trees close to fine turf areas are never a good idea but how can they influence fairway performance? Reduced air movement will lessen the opportunities for drying and shade will again affect evapotranspiration rates. In my experience, I have yet to find a tree-planting scheme that has improved drainage, the converse is often true, particularly regarding alders, willows and poplars. 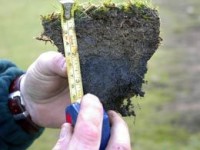 water to penetrate to the underlying soil more freely. Modern tractor-mounted scarifiers can impact on a significant surface area. Only scarify when there is active grass growth to promote recovery and be prepared to lift or sweep up the debris.

Such a programme is best combined with an appropriate schedule of aeration work to encourage better water penetration and thatch decomposition. Only when the thatch levels are satisfactory should you consider top dressing. Burying thatch under a sand layer will do little to improve playing conditions in the long term.

Worms are often regarded as being essential for good drainage and certainly soils with a high worm activity will have a greater overall capacity to absorb water but under traffic the casts become smeared leaving a fine silty layer of surface material that is capable of holding water for long periods close to saturation. In these circumstances the drainage of worm-worked areas is significantly impaired.

It is not uncommon to achieve improvements in playability and surface conditions when worm control measures have been adopted, thus negating the need for sand top dressings (which no doubt take "the sting" out of heavy worm casting problems).

Some initial results from an American research programme suggest that heavy sand top dressings, applying a 37 mm depth over a single season, have reduced earthworm casting by 58% the following season. Further work is required to determine the longer term effects of sand top dressing on worm casting.

Worm activity is variable throughout the golf course and casting tends to be most prolific on compacted areas of ground. A localised approach to the control of casting will be the most economical to apply.

At most golf clubs, the expectation of the club membership hopefully ultimately drives the maintenance programme forward. If the course is expected to be playable and presentable through ten to twelve months of the year then the putting surfaces, approaches, tees and fairways must be firm and dry in all but the most extreme conditions.

Whilst drainage systems can be designed to cope with designated rainfall periods, the maintenance of the soil profile and transfer of water to the drainage system is crucial to the provision of satisfactory surfaces. Sand top dressing may well play an important part in this process, particularly where high drainage design rates are required.

Members will always demand higher standards than those currently provided but reconciling member expectations with the resources and budgets available is the greatest challenge facing most course managers.

It is important to prioritise where resources should be directed. Many clubs would be better served if greater attention were given to the development of better playing conditions within the green complexes and particularly approaches rather than embarking upon a fairway top dressing programme. After all, at least 50% of shots are played on the green or close by and it would make little sense to spend a disproportionate percentage of the maintenance budget on areas of the course which, in reality, receive the least amount of play or where traffic may be easily redirected.

If a fairway top dressing programme is deemed appropriate then concentrate on the weakest areas first, such as landing zones, key traffic routes or the wettest fairways.

The selection of appropriate materials will be primarily based upon local availability and cost. Representative samples of materials for consideration should be available together with sieve test analyses so that an informed decision can be made based on sound agronomics rather than cost alone. The quality and consistency of supply are important, particularly when large quantities of sand are likely to be used.
Conclusions

So you've been through the assessment process and are satisfied that adequate surface and sub-surface drainage is in place, thatch is under control, compaction is not an issue and worms represent no threat to the playability of the course yet problems remain over surface moisture retention during wet conditions then your fairways are likely to be a candidate for a fairway top dressing programme.