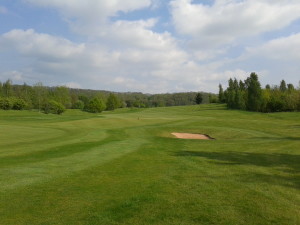 The fairways at a parkland golf club in Worcestershire reached new levels of presentation and performance this summer after the application of the latest fertilizer product from Everris.

According to Mark Heath, Course Manager at the 900-plus membership Vale Golf and Country Club near Pershore, the 14 fairways on the 18-hole main course have been transformed since he used ProTurf 20-0-7+3CaO+3MgO in early April.

The product, launched at this year's BTME, has a unique constituent called Polyhalite in its formulation, a naturally occurring mineral made up of potassium, magnesium and calcium, that Mark believes is giving his fairways enhanced sward thickness and a richer green colour.

"They are clay fairways comprising predominantly ryegrass, and they can thin out after growth surges and the effect of fertilizer wears off. Yet it's been far from it this year," Mark reports. "Twelve weeks and more after application the sward was thicker than ever before and the richness of colour persisting."

"The fairways have always been quite reasonable, though their appearance often suggested they might be 'hungry'," he added. "It was this that made me want to try something fresh this year."

"What we had been using was dusty and smelly, not at all pleasant for my greenkeepers or indeed the golfers. Straight away ProTurf was a huge improvement. The clean prills were pleasant to apply and 'sat' deep in the turf."

"We host a Jamega Pro Tour tournament each May and I always want the whole course looking its best for it. This year the presentation of all the fairways was the best in the course's 21 years. I've been here for 20 of them and can vouch for it. I thought as we moved into July growth would tail off, but it didn't. It's this lasting effect that has impressed me most about the new fertilizer."

Mark had planned to cut the fairways a bit tighter this year, reducing from 16mm to 14mm, and the thicker sward he's getting from ProTurf is really pleasing member golfers, he says. He also applied the fertilizer to a 12ft strip of semi-rough, which he cuts to 30mm, and this too is thicker with a healthier colour this year.

By his own admission Mark admits he's not given to handing out compliments, but he's genuinely full of praise for ProTurf.

"In simple terms, using ProTurf is good for business," said Mark. "Course presentation is everything. Membership numbers and golf day repeat bookings for next year are as healthy looking as our fairways. Anyone looking down the 9th fairway from the clubhouse couldn't fail to be impressed. There's a huge sense of satisfaction for myself and my five full-time greenkeepers too. It's definitely a 'win-win' product, and I'll be using it again in 2014 as a start-off for the growing season."

Mark applied 140 bags at 30 grams per square metre to his fairways. He also applied Everris' new Greenmaster Cold Start with 8% iron content to all the approaches. He cuts them at 10mm and says they have never been denser or healthier well into summer, blending perfectly with the enhanced fairways.