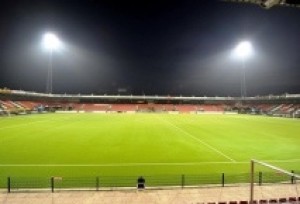 Club announces artificial pitch to be installed after concerts.

In 10 days' time, when Status Quo finish their set and close 'Rock The Stadium', Falkirk football club will go "down, down, deeper and down".

They'll dig up the grass surface and soil in preparation for the plastic playing pitch for next season.

The opening league game at the ground will be delayed until the middle of August and The Falkirk Herald understands any necessary cup ties will be played at either Broadwood or Recreation Park in Alloa.

Greenfields UK Ltd will supply and install the new park - the first 'MX woven synthetic turf' in the UK. It uses a green 'crumb' instead of black, and is used by French side Metz and Dutch clubs Heracles Almelo and PEC Zwolle. Bairns boss Gary Holt visited the clubs and said it was better than anything he had experienced in the UK. "It'll benefit the style of play and what we want to achieve with the team," he said.

Falkirk have funded the pitch themselves - with help from five-year loans from directors and other "private enterprise close to the club," but plan to meet with Falkirk Council and the Stadium company this month for further talks. Additional grants could help contribute to the costs, as will moving from the present base at Stirling University.

"We have a business model," director Douglas McIntyre explained to The Falkirk Herald, "that should see us able to repay this funding within five years. If the council want to come onboard with the plan too then we'd welcome their input too.

"When I returned to the club as a director three years ago we were losing £1m a year - things have changed this will continue to help move the club forward.

"We are paying a little bit more than we expected for the pitch, but that is to bring in the best surface we can afford - it will be the first of its kind in Scotland."

As well as using green crumb the park is woven like a carpet, which it is said, aids resilience and results in a more even roll for the ball.

The surface has been specifically designed for football with a 50mm pile height compared with the longer 60 or 65mm pile height turf which has been used for mixed football and rugby uses.

The completed installation will be FIFA 2 Star recommended and from the same manufacturers as Stenhousemuir's Ochilview surface and as such will conform to the SPL and SFL.

"Four SFL1 teams will be playing on artificial surfaces next season and Gary Holt has been impressed with this one when he has seen it - that is obviously vitally important," added Mr McIntyre, who played a leading role in the process.

The pitch proposal did meet some criticism, notably from shareholder David Lapsley who protested against its installation at the club's gala awards dinner by taking a bag of grass seed on stage.

But even traditionalists are ready for the pitch. "I guarantee most of the big clubs in the country will go to astro-grass within 10 years," technical director Alex Smith told fans recently.

The pitch is said to look natural using a combination of colours to contribute to the natural look, and avoiding the 'black beads' of other synthetic pitches.

The Greenfields came top of five tender submissions and Bill Gillespie of Professional Sportsturf Design Scotland said "The benefit of this woven product is the ability of the carpet pile to stand upright, allowing the players to get their boot under the ball."

Fixtures will be released next Wednesday (June 19) with Falkirk hoping to play their first league game no earlier than August 17. Once installed, the pitch will be used for all first team and U20 games and training, allowing them to locate back to Falkirk from Stirling, where the club's youth players will remain with the regional academy.

It will also be used by the Falkirk Football Community Foundation and for hire to local clubs and individuals.