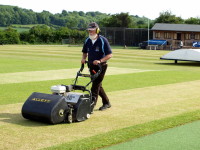 World-renowned Hambledon Cricket Club has extended its Allett equipment inventory with the addition of a specialist verticutter cartridge head for use with the club's C-24 pedestrian mowing and turf maintenance system.

Responsible for helping maintain the square and prepare wickets at Hambledon's Ridge Meadow ground, the Allett C-24 with its interchangeable cartridge heads is working alongside an Allett Regal 36 which, in common with Regals found at many other club and county cricket grounds, is being used exclusively to mow the outfield.

The arrival of the verticutter cartridge head for the C-24 coincided with the 10th anniversary of Allett's association with Hambledon, one of the world's best known clubs and regarded widely as the "cradle of cricket".

Formed around 1750 and located in rural Hampshire between Petersfield and Portsmouth, Hambledon was the foremost cricket club in England during the 1770s and 1780s, promoting and encouraging the growth of club cricket throughout Britain and establishing itself as the accepted authority and governing body of the game. 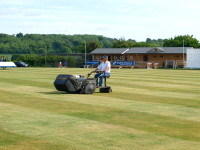 During the late 18th century, Hambledon was responsible for formulating and laying down many of the rules that are applied in modern-day cricket. It is this history and reputation that today draws cricketers and cricket lovers from around the world on a pilgrimage to Hambledon and to the nearby Bat and Ball Inn where club meetings were once held and cricket's earliest laws were drafted.

The need for a verticutter cartridge head to complement the Allett C-24's 10-bladed cutting cylinder with turf groomer unit followed soil analysis taken at the ground last autumn which identified a significant build-up of thatch within the square.

To combat the thatch, which hinders the production of consistently firm and even wickets, the decision was taken by the club to combine close mowing of wickets with regular verticutting throughout the growing season. The appropriate Allett cartridge head - one of eight interchangeable heads available for the C-24 - was delivered and installed at the club in April by Allett's sales director, Leigh Bowers.

"The company is delighted that Hambledon continues as a loyal Allett user and has now clocked up 10 years of using Allett mowing equipment to look after a wonderful ground which is home to one of the best-known cricket clubs in Britain, if not the world," said Leigh. "We wish the club and its many senior and junior teams every success for the future."