0 Fans to pay for pitch renovations 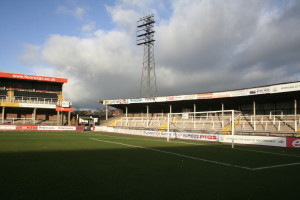 BULLS fans have a chance to call a two-metre square patch of the Edgar Street pitch their own until the end of next season.

To fund essential drainage work at the ground, supporters are being asked to sponsor a square on the pitch - with a minimum bid of £25, or £35 in the penalty areas, required.

The corner flags and the penalty spots will be auctioned at Friday's night Sportsman's Dinner with ex-World heavyweight champion Tim Witherspoon at the Starlite Rooms.

There will also be a special auction that night for the squares from which Ronnie Radford and Ricky George scored their famous goals against Newcastle back in 1972.

Fans will have the chance to have a picture taken with a player of their choice on their square, while the successful bidders for the Radford and George squares will have an opportunity to be photographed on the pitch with one of the pair of United legends.

"The pitch is divided up into 1,925 squares with a grid reference allocated to each square," said Bulls director Bob Pritchard.

"There has been a lot of interest already - when we have sold 50 per cent of the grid the club will enter all grid references into a weekly draw during the playing season and there will be two prizes of £50 and £25 awarded to the two successful grid winners.

"So you may find that your purchase has cost you nothing."

The relentlessly wet weather has taken its toll on the Edgar Street playing surface this season.

"The only maintenance in recent years has been seeding, sanding, grass cutting and marking and it's fair to say we have faced quite a few problems, largely due to the fact we have had a really wet winter," said head groundsman Ian Pritchard.

"We have played at least six games when the matches should not have gone ahead due to such soft and muddy conditions but cash flow and revenue took priority.

"All the rain and snow has just highlighted that the pitch and the drainage, in particular, needs a lot of work doing to it.

"We have been working four times harder simply because of the drainage.

"Experts who have dealt with the pitch at Old Trafford and the new FA training set-up at Burton have recommended that we need a new drainage system throughout the pitch connecting to two catch land-drains down each touch-line, disposing of the water to two sumps with associated pumps to get rid of the water faster.

"On both wings, water collects due to the cambers being wrong but the drainage proposals will eliminate this. "Slits across the pitch will allow the water to travel through the land drainage system leaving the surface playable at all times. "The work will take two weeks to complete which will allow us plenty of time for the seed to get its roots in time for pre-season friendlies."