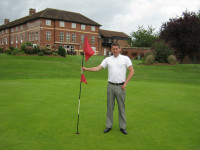 Designed by John Harris and Brian Griffiths, both renowned architects, the picturesque 18 hole parkland course at Telford Golf Resort is challenging for all levers of golfer, featuring 6741 yards along tree-lined fairways, through open greens and over strategic water hazards.

Set in 178 acres, the course features expansive fairways and large undulating greens with lots of speed.
But in 2010, Course Manager Matt Robbins was unhappy with the fairways. "We were using liquid feeds but getting poor results, and soil samples suggested that the fairways needed more nitrogen."

The release of nutrients from Multigreen is solely controlled by soil temperature, giving a long lasting response from a single application, vital as fairway fertilisation is costly in terms of the amount of materials used and the labour involved.

"A contractor applied 140 bags to the 18 fairways using a tractor mounted spreader in April 2011, and the results were superb," comments Matt. "The fertiliser lasted all through the summer, and although the growth tailed off in the dry autumn, as soon as the temperatures and moisture levels improved this spring, we saw the effects of the fertiliser once again. So we gained almost 12 months' action from a single application."

Fairway quality has improved significantly, Matt says, without the issues of flushes and potential disease that more intensive fertiliser programmes can precipitate. "In fact there has been less disease, as the sward is healthier and stronger," he adds.

The application was repeated in 2012, when the mild, wet conditions led to stronger growth. "In this situation we have decided to use Headland's Clipless plant growth regulator to channel the vigorous sward into producing more lateral growth and root development. It's a good combination and I can't speak highly enough of Multigreen and the service I have received from Headland Amenity."