Sixty-seven year old ex-accountant Stephen Daniels has been involved with Feckenham Cricket Club for fifty-five years, just four years fewer than the club has existed. Jake Barrow headed to the small village four miles south-west of Redditch to meet with a man who wears more than one hat! 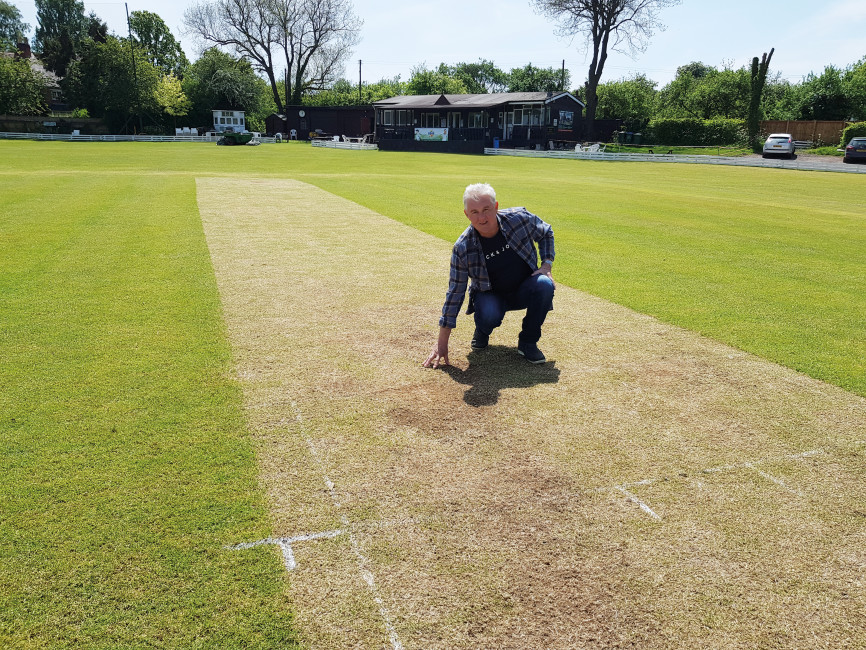 Stephen Daniels uses the skills from his past career to help Feckenham Cricket Club with its financial management, but his skills extend beyond this, as he is the ECB's pitch advisor for Worcestershire, as well as the secretary of the Worcestershire Association of Groundsmen.

Roy McLaren, Tim Packwood's predecessor as head groundsman at Worcestershire County Cricket Club's New Road, was the man in the role before Steve, highlighting it as a position of responsibility.

Through the pitch advisor programme, any club can request Steve's advice, who then travels to their ground to impart his considerable knowledge. He also facilitates the granting of Performance Quality Standard certification.

Not long before his involvement, the grounds on which the current field stands were the domain of Dunstall Court, an ancient country house just outside the village.

In fact, the village is known for this link with minor royalty. It has manors all around, and Geoffrey Chaucer was once 'Keeper of the Lodge' at the Feckenham King's Park.

When the Irish owner sold the estate to move back to his homeland, the club took out a loan and requested to purchase their rented section for around 1000 guineas (about £22,000 in today's money).

"We were raising funds by having bingo nights up in the village hall, and raised the money to pay off that loan within about six years. That's how the ground became ours." 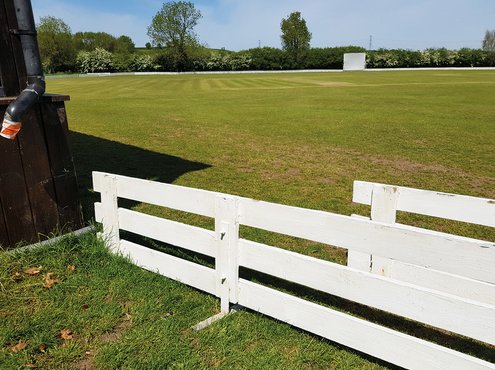 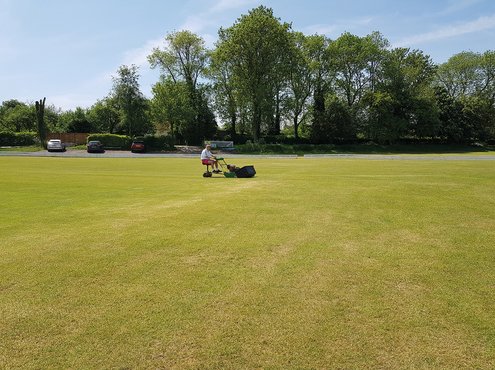 "There are two streams surrounding it. You'll see the one running in the ditch there at the northern edge, and across the next field there's a bigger brook, called Bow Brook, which drains to drains to the south of Redditch into the River Avon near Worcester. They both feed into an old mill stream down Mill Lane by the entrance to the club there. And that's the water course we have to contend with when the weather's very wet, like this winter."

"This is a flood plain. We used to get flash floods in the summer months more often; when you get those thunderstorms in a very short space of time. The fields would flood up from the stream."

"About ten years ago, because the village also floods, Feckenham Council and the River Authorities did some improvements near the old mill. The streams were dredged and deepened."

"Since then (around 2007 during the worst floods), the floods tend to be exclusive to the winter during the longer spells of wet weather. The highest it gets is a good foot above the top of the river bank; up to the level of the cars in the car park!

I gave it a couple of weeks after initially arranging to head over to Feckenham, to give the pitch time to dry out from early May's downpours. The pitch looked overly-dry by the time I arrived.

Steve said: "That's right. It's drying too quickly. The surface is beginning to get a bit on the quick side. We're watering and rolling now."

"It's typical Worcestershire clay, including most of the pitches, although the original eight wickets in the middle were once dug out and had an ash drainage installed beneath them."

The wickets which don't have the advantage of that additional drainage (although there is a ring drain around the square) are dressed annually with high-quality loam. 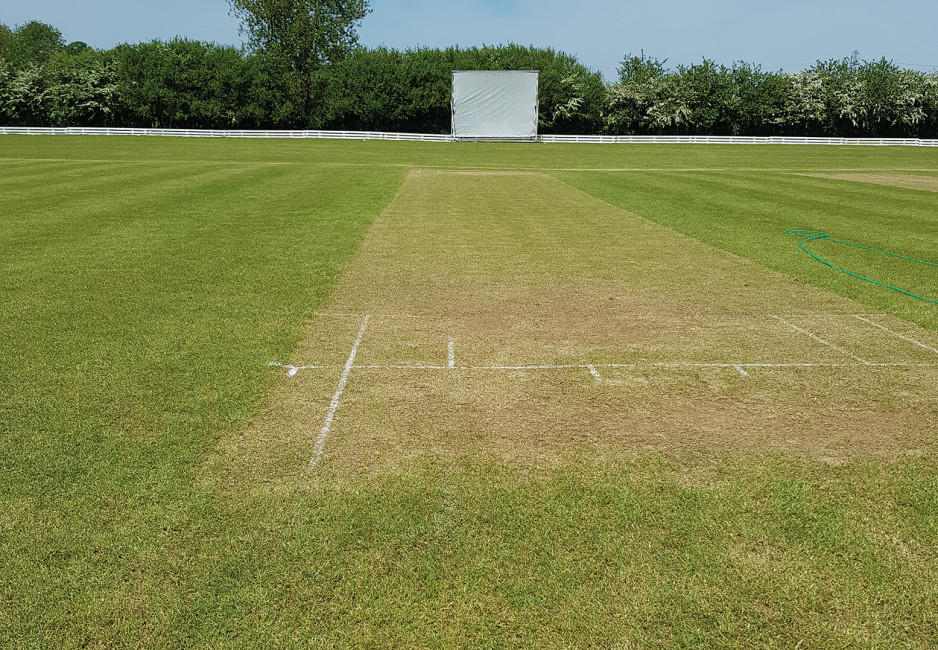 The field is a small one, and that northern edge by the brook is a very makeable straight drive for a decent batsman. Despite this, the field consists of twenty-four pitches.

Because of the club's lack of artificial training surfaces, Steve sets aside the six pitched at either end for practices, retaining the central twelve as matchday tracks.

Steve feels that the wickets are best for batsmen when the weather is at its best, whilst it offers seam advantages during the early season too.

Due to the flooding, they didn't get to organise their first successful game until the second week of May. That means they lost a full month.

As Steve was in a bit of a rush to get the maintenance up and running again, he ended up taking a roller onto the surface while it was wetter than expected and a drive cog was damaged.

This, of course, set them back a fraction further whilst repairs were undertaken, and they hired a roller for a few weeks to cover the inconvenience.

It matched an ongoing problem with mowing: the club's dedicated outfield mower broke down a couple of years ago, and they have been using a gang mower, which will remain until they find a well-priced triple mower.

In season, the outfield is 21mm, the square is 15mm and the pitches are 5mm, with the usual walk-behind kit.

The man who cuts the outfield went to school in Redditch with Steve, and is the one who introduced him to the club when they were both schoolboys.

"We're in the state now [mid-May] of doing our pre-season rolling, six weeks late. To give an example of where it was up to, the first team got something like 146/9, versus a similar score. In the summer, 250-300 would be a normal 50-over score on here." 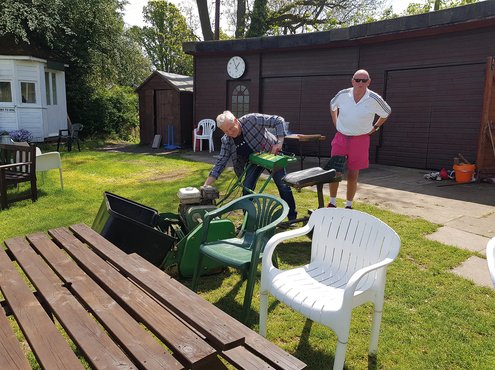 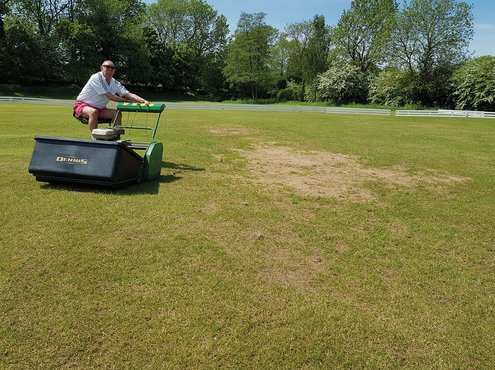 "We had an over-60s county match a couple of days ago, and we tend to bring the boundaries in a bit to help those scores creep up a little."

"The vertical boundaries are very accessible anyway, so one of the issues we have during matches is that the neighbours on the southern edge are very close and, naturally, don't like to be peppered with cricket balls, hence the big net."

"Even then, it occasionally gets breached. The biggest pain is when a six hits the northern side, we have to cross the stream to get it back from the long crops in the farmer's field."

"There was a little gate we used for years which saved a lot of time, but that stile was removed and now there's barbed wire there, so we have to use a stepladder to cross over to find the ball."

Feckenham's outfield is primarily poa. After annual scarification, Steve lays down a pure rye mixture. He assesses each year for the latest institute-approved blends.

"I base this partly on the current advice from Tim at New Road, because he has got a good relationship with Phil Day Sports, who advise him on that year's best choice."

"There's a seed grower nearby which produces the seed for Johnsons products, and that's where Tim sources the best cultivars, so that's very convenient. And, because we collaborate and buy together, all of the county's clubs, through Tim and I, get a bulk-buy discount." 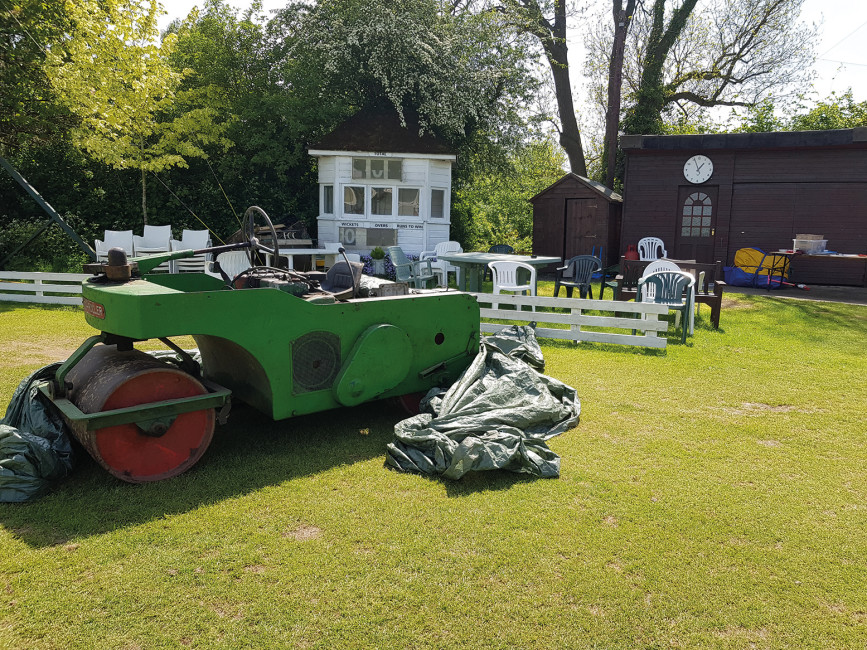 Steve's ability to advise other clubs has to be based on his own experiences, and no pitch is without issues with which to contend:

"This is a typical rural location. The owner of the field onto which this pitch backs - I don't know whether this is still the case, but it was for a long time - used to get a wetlands grant for not mowing until July, to allow natural foliage to flourish."

"Therefore, we get an awful lot of pollen and seeds from weeds like dandelions which are a natural by-product of not mowing for so long. We have an annual weed treatment, which we need soon."

There were a couple of roughly two-by-two-metre patches in the northwest corner of the field showing signs of significant wear.

"This field was originally agricultural, so we once lifted all the turf, bulldozed and laid it back down. That was the economical way to do it back in the mid-1960s, on the little money we had."

"Some of the dips and hollows have since set back in. Water pools in those and erodes the level of the surface, plus the turf. So, we're heavily sanding that to bring both the level and the coverage back up."

"We only sand the entire surface when we think it's likely to be very wet. We've got drainage, roughly fifteen layers, running down to the stream, but it runs slowly due to the clay."

"It's the same old story; the thing is: what do you spend your money on? Ten years ago, it was frequently wet and we considered upgrading."

"But, in recent years, we've had a lot less and the priority then is getting more water on. It's a constant battle between the two. And it's me who decides where that money needs spending." 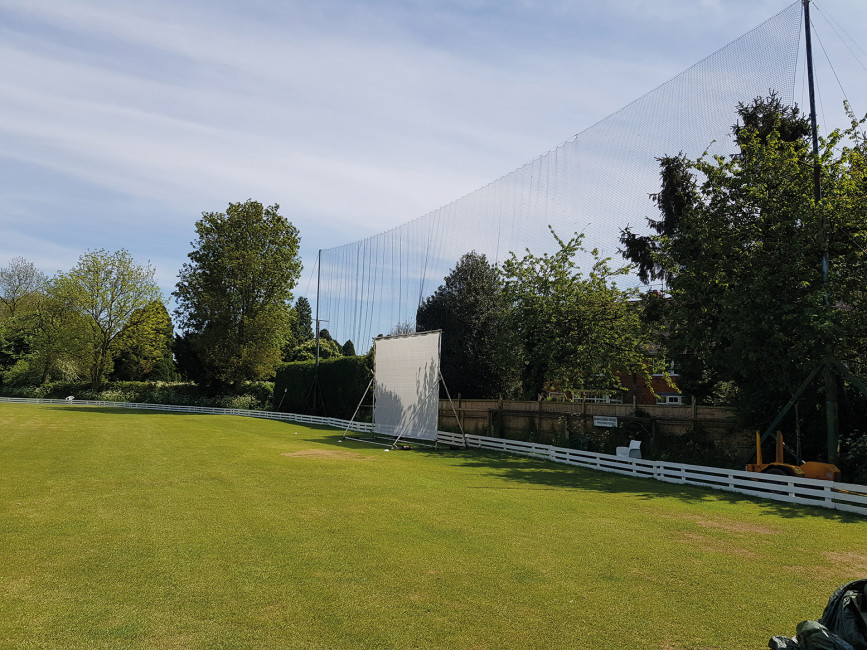 "Managing the account does help me, because I have the luxury of being able to direct as much as I can to maintaining the place."

"I suppose the end of season work on the square will be around £1500, including a couple of hundred quids worth of seed and another two-or-three-hundred pounds worth of fertilisers."

"Thankfully, because I'm on the board of the Association of Groundsmen, we utilise the equipment hire system organised by the ECB."

"Channel 4, back when they had the Test rights, pumped a lot of money into grassroots cricket. One of their provisions was to allocate at least one trailer of renovation items to each of the counties: scarifier; aerator; dragmat; sarell roller; and a couple of others."

"Some of them have started to hire those out for money over the years, effectively operating it as a business. Worcestershire is one of the few left which still lend them as they were intended."

"With those pieces of kit, we use a pedestrian spiker every autumn. We sometimes use Phil Day's tractor-mounted Terra Spike too, and a fraise mow maybe once every five years."

The club runs a second surface not far away, which was tested not long ago. This showed high levels of potassium, and ideal levels of clay for bouncy cricket. Naturally, Steve now uses low-potassium products on both surfaces.

"When we do the bulk-buying of feeds for the local clubs, we offer a checklist of requirements, such as low-potassium, low-iron or whatever."

"Here, I focus on quite a high level of iron, because it lies wet for long periods. It always will lie wet to an extent - that's just in the nature of the terrain - but, the high-iron autumn/winter feed keeps it to a manageable level."

"In the summer, I'll take out a sprayer and spray the whole square with a seaweed-based feed, which may have contributed to the high levels of potassium, but that isn't necessarily a bad thing, as it results in good nutrition."

And such priority is crucial, as profoundly and rhetorically expressed in the famous words of that legendary Feckenham lodgekeeper, Mr. Chaucer: "If gold rusts, what then can iron do?"