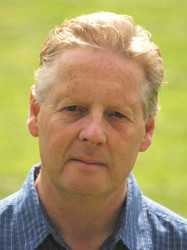 When Terry Pritchett wrote his best selling novel Feet of Clay he certainly wasn't thinking of Football or Rugby pitches in the UK that's for sure!
However, the title would have been particularly appropriate to our industry, as thousands of Course Managers, Green Keepers, Groundsmen and players can testify.

Many of our winter sports pitches, and golf courses too for that matter, are constructed on clay soils which are very susceptible to soil compaction. This can present particular problems when it comes to drainage throughout the playing season and also when it comes to end of season renovation work.
Clay soil is regarded as inherently problematical by most turf managers -wet, soggy and often unplayable in winter - rock hard and unforgiving as a playing surface in summer.

Soil is a combination of varying sized particles, consisting of sand, silt, clay, minerals and organic matter. Air and water are retained and circulated within the air pockets between soil particles known as 'pore space'. In ideal conditions the ratio of air to soil particles would be 50:50. The reality of course is very different, especially in soils supporting sports turf.

Clay is the smallest of the present soil particles, with 1,000 times the surface area in a given volume of soil when compared with larger sandy soil particles. What this means, is that clay packs together tightly under pressure of play and binds water within the soil profile by surface tension preventing water percolation and drainage.

If the clay content is more than 30-40%, it would be considered as heavy clay with the typical sticky and smeared gluey characteristics we all witness every winter on heavily used areas of sports turf.

Clay tends to swell when wet and if compacted will remain saturated, cold and undrained for long periods. As a result the soil will freeze to considerable depths in cold winters, causing root damage and suppressing beneficial microbial activity long after sandy soils have dried out and warmed enough to create good growing conditions. As spring arrives, water evaporates slowly, preventing early recovery from the ravages of hard winter play.

The following summer sunshine rapidly converts compacted clay soils into 'concrete', preventing penetration of roots and also moisture from rainwater or by irrigation due to 'run off'. In these conditions, newly sown grass plants will burn off rapidly, leaving bare cracked areas for weed invasion and presenting poor playing surfaces for the new season.

Establishing whether you have clay soil or not is very easy; first take a handful of soil and gently squeeze it, clay soil is sticky and plastic-like and will roll into a fairly solid ball readily without breaking up, whereas sandy soil will crumble easily. Rubbing the soil gently between your fingers will also create a polished finish to the clay.

Not that clay is all bad news - clay soils are usually very rich in nutrients and established grass generally survives drought periods far better than on lighter soils. 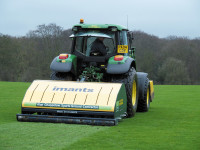 Choice of machinery to relieve compaction, and for use during renovation, is critical with clay soils, as is timing. The use of heavy machinery should be avoided at all costs especially in wet conditions. Any machine using tines is potentially damaging to clay soils and should be used with caution.
There are some excellent high speed and very efficient tined products on the market from Weidemann and Redexim -Charterhouse with their latest Verti-Drain models. The very promising Gwazae Ground Probe system from Keith Kensett, which uses compressed air is very fast and effective. Problem is, they all have limitations when operating in clay.

Let me explain the rationale behind this statement with the following case history:

Recently I was asked to visit a well-known rugby club near Bristol where the pitch had been virtually unplayable for almost two months. Next-door was an equally established football club with the same problem. The Groundsman explained that despite "applying 50 tonnes of silica sand for seven years, in conjunction with a tined Aerator/Decompactor working to 25cm depth, and drag-matting to incorporate the sand" the pitch remained unplayable on many occasions every winter.

The pitches are constructed on the typical heavy blue clay widely found in the Bristol area, with a minimum of topsoil providing the root-zone for turf. The problems generally associated with clay soils as explained above had, in this particular situation, been made infinitely worse by the use of a tined decompactor.

The tine on exiting the hole it had just created, had smeared the walls and sealed it like a test tube, producing reservoirs from which water could not escape vertically or laterally. Filling these holes with sand had not improved the scenario one iota either, as the pitch now merely consisted of thousands of sealed and waterlogged sand columns. This is by no means an isolated case either but a very common problem which I have experienced on clay based pitches all across the UK.

Now, I am not suggesting that everyone on clay soils should throw away their tined Aerator or Decompactor - far from it, they are fine machines. However, if you're going to use these products on clay. I suggest that you do so in conjunction with lateral decompaction using a Rotary Decompactor. These machines will effectively move the soil and sand sideways shattering the sand columns and create slits to 30 cm depth where feasible, thereby joining up the holes and allowing the water to disperse more effectively.

Better still, apply your sand with a spreader and buy or hire in a Rotary Decompactor fitted with coulter knives to incorporate your sand in continuous slits, in conjunction with drag-matting and over-seeding etc. at the end of the playing season. 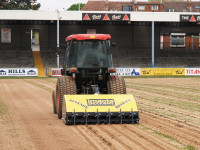 After renovation work is completed, it is a good plan to make use of the Rotary Decompactor again in August when clay soils are generally dry and hard. This allows maximum shattering effect and creates fissures within the soil, allowing air and water to circulate throughout the profile.
Rotary Decompactors create a shattering wave action like a seismic wave from a real Earthquake.

The following autumn and winter rains reduce the possibility of slits opening up from shrinkage to an absolute minimum.

Clay soils have advantages as well as disadvantages to the Groundsman and Turf Manager. The trick is deciding how to manage it. Obviously, getting as much sand as possible into the pitch is desirable, especially in the early days of getting your clay soil into a playable surface for the whole season.

Placing the sand by deep slitting is by far the best and most cost effective option for most situations, especially for non-league clubs with limited budgets.

Maintaining the turf by regular continuous linear aeration from different directions throughout the winter, using slitter/aerators, will create inter-connecting channels within the root-zone. This will help disperse surface water into the sand slits and keep pitches in use during wet weather conditions.

There are numerous UK based sports ground contractors available to carry out sand incorporation and decompaction using the linear slitting technique. One such man is Alan Chappelow from Mirfield near Leeds who owns two 2.2 metre Rotary Decompactors and treats approx 100 pitches every year. Alan says, "I am a great fan of the Imants system. It works wonders for drainage on clay pitches. We have found it really improves playability throughout the season, especially when used to incorporate sand in continuous bands at 25 cm spacings and 30-40 cm depth."