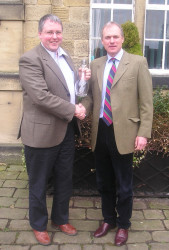 Tim Fell is the new Chairman of the Turfgrass Growers Association (TGA).

Fell, whose company Tillers Turf has been growing turf in Lincolnshire for 25 years, took over from Robert Adcock when members gathered at the STRI for their Spring meeting.

He is an active ambassador for turf and is determined to raise further the profile of the association as a body of highly knowledgeable professionals, passionate about their product.

"Members of the TGA are already leaders in the industry when it comes to innovation, quality and service. We want to continue to set the standard for turf production in this country", he says. "I would like to see the TGA Standards for Cultivated Turf being used universally in any specification for turf."

His two year stint as Chairman comes at a time of unprecedented challenges for the turf industry. The recession is having a major impact on the income of turf growers, some of whose businesses are underpinned in large measure by the property market. The highly specialist sportsturf market is less affected. Other pressing issues facing turf growers today include the reduction in the numbers of pesticides, and water restrictions.

Fell praised the work of the TGA Council, Chief Executive Tim Mudge and the association's former Chairmen for the substantial progress made in promoting the benefits of turf and addressing matters affecting turf production: "The TGA has worked hard to raise the awareness of the benefits of turf to the Water Industry and Local Authorities. The message is getting through that turf is the unsung hero of the landscape."