0 Fell hands over the reins at TGA’s spring meeting 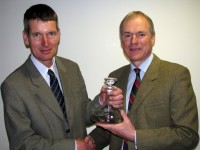 Incumbent chairman of the Turfgrass Growers Association, Tim Fell, was praised for steering the group through a challenging two years as he handed the reins over to fellow grower Hugh Dampney at the association's spring members meeting in Southport.

Dampney drew applause from the sixty members gathered at the Ramada Plaza Hotel as he described the achievements Fell had contributed to during tough trading conditions, including the inclusion of TGA member-grown turf in the landscaping contracts for the 2012 Olympic Games and the successful negotiation of a discretionary 28 day exemption for newly laid turf in the event of drought orders being imposed. He presented his predecessor with an engraved decanter and more than £200 of fly fishing vouchers to mark his term in office.

The one day event, sponsored by Trebro, began with a diverse programme of presentations, including Austrian turf grower Alex Richter of Richter Rasen who told the sixty guests about turf production at his 300 acre site in Burgenland, Austria and in Zahorie, Slovakia, along with a potted history of his company which was founded more than 100 years ago.

He was followed by John Dye of Scott Pallets, who stimulated great interest and debate by proposed the creation of a pallet pool for TGA members, enabling them to reduce both costs and the volume of waste deposited in landfill.

The morning session was rounded off by Ian True, Sales Manager for Trebro Manufacturing, introducing the company's Trebro AutoStack and SC 2010 Roll automatic stacking turf harvesters. Members travelled several miles down the road to the turf nurseries at Turfland to see both superb machines in action under the supervision of the company's Harvesting Team Leader, Tony Meath and Trebro UK's Managing Director, Mark Southcoat. Turfland is the first grower in the UK to take delivery of the first Autostack II in the UK, which has a long list of new features but is easier to operate and requires 40% less maintenance, resulting in more time spent harvesting and reduced labour and parts costs.

The next time the turf growers will convene will be at the TGA's biennial turf show, which is being hosted by J&B Farnaby near Scotch Corner on 28th and 29th June. Further details of the event are available from www.turfshow.co.uk.