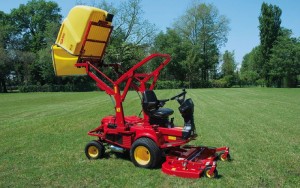 The first T4 was purchased in 2004 after persistent blocking issues with the old mowers was causing disruption when it came to maintaining the site, whilst not providing enough reliability that plots and pathways could be cut for both the research work and prior to plot visits.

This issue was especially prevalent when it came to cutting dense plots of clover at the institute, which was awarded the Times Higher Education Award in 2013 in the Outstanding Contribution to Innovation and Technology Category.

Colin Fudge, agricultural engineer at Aberystwyth University, is one of almost 400 staff that works at IBERS, and he explains how the initial demo and performance of the T4 eventually lead to the purchase of two more machines in 2014.

"During the demo they took the T4 into a dense plot of clover, and it went through with flying colours, and that was the area where the machine really excelled," Colin began.

"It really impressed us, and that lead to us purchasing the second-hand machine which we are still using now some 13-years later.

"We added another two mowers in 2014 through Gianni Ferrari dealer Major R Owen, and that was because we were impressed with the machines and their performance as a whole over an extended period of time.

"We really needed a mower that we could rely on to cut at any time of the year in almost any condition, as cutting at the correct time is essential to maintain the scientific rigour of our plot maintenance, and also cutting paths when we were expecting visitors to the plots, because presentation is important to us, so by getting these machines we were able to maintain our high standards.

"The mowers are used for plot work and on the paths in-between the plots to keep the site tidy, so it's important that we can do this on a constant basis to maintain standards.

"Up until the time we had a demo of the machine we were unable to find a mower that was powerful enough to cut wet grass, and especially clover, that wouldn't block up.

"So if we had heavy rain the night before but it was fine in the morning, we would have to leave it until mid-afternoon to start cutting because of the blocking, and trying to do it would be a total waste of time.

"The Gianni Ferrari mowers really help us stay on schedule with our cutting regardless of the weather, and that's why we continue to use them."

This ability to cut wet grass and clover stems from two important innovations that are featured on the machine.

The first is the rotation direction of the blades, the blades turn in the opposite direction compared to traditional mower decks, and this rotation reversal has surprisingly positive results on cutting quality and collection efficiency.

When combined with the revolutionary patented RCATM collection deck, which has a large collection capacity, the T4 provides a high-quality cut in wet conditions without any clogging, with all the grass or clover going into the 1300 litre grass collector.