'Rising fertiliser prices and tighter budgets, together with seemingly more variable and challenging weather conditions'. This scenario probably sounds familiar to most people, at a time when we are all being encouraged to be more efficient in our use of inputs, as well as paying more attention to our environment.

This article outlines some strategies that can be employed using logical, strategic use of nutrients, together with biological components, to achieve a far greater effect from your fertiliser, with an added bonus of a more stable and less demanding turf.

The cost of mineral nutrients included in specialised amenity fertilisers has risen sharply over the past 12 to 18 months. For example, the cost of basic agricultural grade fertilisers, such as 34% nitrogen, has more than doubled.

Therefore, utilising fertiliser in a rational manner is surely the optimum way to proceed, in whatever situation you find yourself. Of course, it should go without saying that it is always important that fertiliser, what ever its type, is applied accurately and at the correct time to maximise the benefits to the plants and to minimise environmental losses.

Nevertheless, by a) making the nutrients more available in the soil, b) facilitating better nutrient uptake into the plants and c) enabling the grass to utilise nutrients more effectively, the mineral components of fertilisers are put to good economic use. All these processes require biological interaction and can be improved greatly by the increase in microbial activity and enhanced by the addition of biological growth stimulants.

Whilst some formulated nutrients, such as urea, function with minimal biological activity to enter plants others, such as methylene urea and organic-based carriers, require microbial activity to be used fully.

Whilst bio-stimulants, such as kelp, humic acids and vitamins, have been widely employed in different types and combinations to improve plant vigour and stimulate plant growth for many years, microbial populations have not been viewed in the same light. Bacteria and fungi have been viewed with suspicion, presumably because they were purely associated with disease, yet it is now well known that many types play vital roles in nutrient cycling in the soil and uptake into the plant.

The role of bacteria 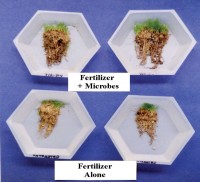 Bacteria play a vital role in breaking down and recycling organic matter to release nutrients back into the soil. In artificial growing conditions or sterile soils this process is greatly reduced due to the reduction in favourable conditions for bacteria, so any cultural procedures (such as aeration) or amendments that enhance beneficial bacterial will increase the benefits from fertiliser application.

A good example of this came from trials investigating bacterial complexes to improve major nutrient uptake.

Rooting zones that are inoculated to increase natural microbial activity are generally understood to provide greater ability for the plants, to not only root more successfully but also as a secondary benefit to result in more robust and resistant plants.

In future years it is almost certain that the role of bacteria, both in improving nutrient content in soils and assisting plants in mineral uptake, will be more fully exploited.

However, it is already clear that nurturing microbial activity and adding specific bacterial complexes in the soil produce far more nutrient efficient plants. Additionally, it is almost certain that bacteria strains or complexes will take increasingly important roles in combating soil-borne diseases that are currently allowed to become far more virulent than in natural conditions, due to lack of competition from "beneficial" bacteria.

Fungi that assist plants to root 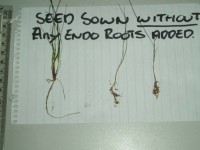 Although fungi have, in the past, been better known for causing plant disease, there are also fungi that are both antagonistic to pathogens as well as others that work symbiotically with plant roots. The former group are currently under research and likely to be exploited as bio-fungicides in future years. The latter group of symbiotic fungi (mycorrhiza) can be used strategically to establish grass and aid recovery, especially in soils that are nutrient poor.

By influencing the growth habit of grass, mycorrhiza specifically assist a plant in enhanced rooting, resulting in:

Whilst the addition of mycorrhiza is not going to assist in a situation where plenty of nutrient or water is made available, it's application is a very valuable tool at times of recovering from rooting problems or particularly when growing in new seed or turf.

As the pictures below illustrate, at least where sand-based greens are concerned a mycorrhiza inoculate demonstrates itself as a cost effective investment. This is true for not only the establishment of the grass but also its ability to take up greater amounts of the fertiliser that is applied to the soil, before it is lost through the soil profile. 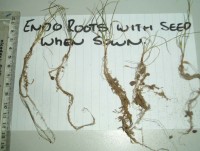 It is not usual for comparisons to be made to treated and untreated turf, due to uniformity, but the pictures illustrate differences in roots when seed is sown in sand-based trays to demonstrate the ability of the mycorrhiza to stimulate greater rooting.

Unlike bacteria, which are more sensitive to extremes of pH, the performance of mycorrhiza fungi is more closely related to the ability of the plant to grow. Therefore, if the conditions are right for grass growth, then mycorrhiza will be able to form an association with the roots, provided it is placed in the rooting zone of the grass plant, either at establishment or at aeration.

Optimising conditions for efficient fertiliser use

It is always going to be necessary to put the playing conditions of any sports turf as the number one priority. However, without jeopardising that priority and by using good cultural practices with strategic applications, biological activities can be maximised for financial advantage, especially since organic-based products have not recently risen in price to the same degree as mineral fertilisers.

For the greatest activity bacteria require a consistent food source, water and oxygen. In a sterile, sand-based, often acidic and anaerobic golf green, these conditions will work against bacterial activity and, therefore, make nutrient use efficiency poor.

To improve these conditions might seem to go against what has, by some, been recommended in the past to reduce disease incidence but, if conditions inhibit bacterial activity then, inevitably, input levels for this turf will continue to stay at a high level and 'sustainable golf' will never be attainable, even given the variation in definitions of 'sustainable golf'!

On the other hand, mycorrhiza fungi populations are less easy to maintain in sports turf, owing to the continuous cutting of the grass. However, their strategic introduction at crucial times of reconstruction, over-seeding and renovation are not dependant on specific conditions, so long as inoculants are placed in the rooting zone of the grass.

Contrary to popular concern, the occasional application of fungicide does not necessarily decrease mycorrhiza fungi, because not all fungicides are active against mycorrhiza, the target parts of the plants for application are different and they are most often applied at different times of the seasons. 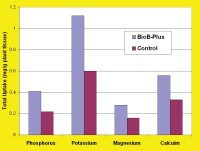 Whilst mineral fertiliser prices have remained relatively low over recent years little attention has been paid to the efficient use of nutrients. Now, it is not only possible, but also extremely desirable, to get more out of turf grass by making sure that the plant nutrients applied in fertilisers are used more efficiently.

To achieve this goal does not require the turf manager to make major changes in most inputs or activities, but by bearing in mind more natural biological processes and encouraging these where possible. Therefore, without radically changing the regime that has worked successfully in the past, you can bear in mind two simple ideas:

2. Integrate biological activity products with standard inputs to improve efficiency (i.e. don't be afraid to mix and match inputs in a rational manner)

A final comment to the sceptics; biological activities have evolved naturally to the advantage of both plants and animals over millennia, though only since the late 1940s have synthetic products dominated agronomic inputs. Therefore, which approach should be considered as a 'fad'? The two approaches are not mutually exclusive, but can both be used to benefit each other, so why not 'integrate to accumulate'!

For further agronomic and technical advice, or information on availability of appropriate biological products, contact Hugh Frost of Novozymes Biologicals