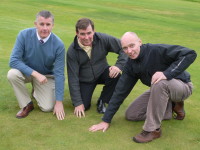 The credit crunch has come as a blessing in disguise for one top golf club.

After a planned £0.5m fairways irrigation system at the exclusive private Harleyford Golf Club in Marlow, Bucks, was forced to be put on hold, head greenkeeper Simon Marsh had to rethink his strategy.

"We knew banks would be unwilling to fund the scheme," said Marsh, "so I had to look at other ways to improve fairways without water".

A committee member of the Berkshire, Buckinghamshire and Oxfordshire (BBO) region of greenkeepers' association BIGGA, Marsh raised his concerns with fellow member Martin Townsend, turf and amenity manager at Countrywide Farmers plc, who put him in touch with seed producer DLF Trifolium, whose products he distributes.

"Harleyford is an extremely free-draining course, laid out over chalk and flint with only a thin layer of topsoil," said Marsh, who considered overseeding as an alternative to irrigation and, working with his course agronomist, Andy Cole, chose a dwarf rye mix for the process.

He visited DLF's demonstration growing fields at Inkberrow, Worcestershire in the spring, believing that dwarf rye was the way forward for his fairways but left with other ideas. "I saw the great potential that Quatro sheep's fescue offered our course," he said.

"We took some away with us and tested the fescue and the dwarf rye side by side. Results spoke for themselves: the fescue was the obvious choice. It offers a high quality, dense, good coloured sward and requires less nutrient and water input, so is suitable for drier sites."

Marsh switched his strategy, introducing sheep's fescue on all 18 fairways. "The whole overseeding programme cost £10,000," he said, "and it should make our maintenance more sustainable in the long run."