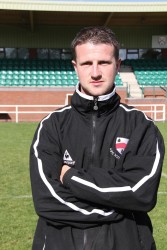 Talk about landing on your feet. AFC Wulfrunians certainly have, and they must be the envy of many football clubs in the Midlands. Why? Because they have acquired one of the best purpose built sporting facilities in the West Midlands, the Castlecroft Stadium.

The site was originally owned and developed by Wolverhampton Wanderers Football Club as a training ground, and was acquired by Wolverhampton Council in 1986 when the club went into receivership. The Rugby Football Union (RFU) took a lease on the site in the early 1990s and made considerable improvements to the facilities, in conjunction with Tarmac plc, adding both a hotel - opened by Bill Beaumont in October 1992 - and a stadium, which doubled as a stand and office block, to create the RFU National Training Centre.

The hotel was sold, a decade later, to become a private housing complex, but the role of Castlecroft grew, with the stadium hosting upwards of seventy games each year, many of them schoolboy internationals.

When the RFU decided to relocate the National Training Centre to Twickenham in 2007, the local authority put the whole site up for lease. And that's when, eventually, AFC Wulfrunians stepped in.

The club, founded as the Wolverhampton Grammar School Old Boys Football Club in 1923, and later to become Old Wulfrunians, played in local amateur leagues. In 2005 AFC Wulfrunians, was established to give senior players the opportunity to compete at a higher level.

Success was instant, with the Wulfs winning Division 2 of the West Midlands (Regional) League in their first season. This was followed by promotion from Division 1 to the Premiership the following year. A season of consolidation, when they finished sixth, was followed by becoming Premiership champions in the 2008-09 season.

Normally, this would have meant promotion to the Midlands Alliance, but the Brinsford Lane ground they shared with Wolverhampton Casuals, which both clubs believed was of Step 5 standard, was not deemed so by the FA. So, another year in the Premiership looked on the cards.

However, in the spring of 2009, the club approached Wolverhampton Council to enquire about Castlecroft, whose extensive facilities were lying unused, and with the pitch and training area turning to meadow.

Taking on this facility was a bold move for the club, as they were reliant on a dedicated band of volunteers to undertake the maintenance.

The stadium offers a full size floodlit pitch plus an area for training. The stadium seats 500 spectators and has top class changing room facilities, along with offices, function rooms and a licensed bar.

The club took over the management of the stadium in March 2009, and it was to be a huge effort to try and get the ground up to Step 5 condition in the short period of time before the start of the 2009-10 season.

Sadly, they just missed the league's deadline and, whilst the club felt the decision was harsh, as all could see that it would eventually meet requirements by the start of the season, no exception could be made. As they say, rules is rules! In fairness to the league, they would already have begun the process of finalising fixtures in the various divisions.

So, at the start of the 2009-10 season, the club found themselves in the strange situation of having, what is arguably, the best Step 5 ground in the country, yet unable to play at that level.

With Step 5 now approved, look likely to make the step up to the Midlands Alliance next season. This, in turn, will attract more senior players to the club and expand the youth section, giving them a sounder financial footing and enabling them to invest in the facilities, including the pitch.

Head Groundsman is Matt Clayton, who spends around twenty hours a week at the ground, alternating his time with his landscape garden contracts.

Whilst Matt busied himself bringing the pitch up to Step 5 standard, the club's Stadium Manager, Steve Brindley, Vice Chairman, Ian Round, both volunteers, plus a host of other club members, worked tirelessly to get the facilities back in order. Much of this was cosmetic, redecorating throughout, ensuring that the changing room plumbing worked and that the bar and catering facilities met hygiene regulations and would be able to cope with the influx of members. Matt takes up the story:

"It was all hands to the pump. We had a very tight schedule to bring everything up to Step 5 standard. As it turned out we just missed the deadline, but we are ready for next season.

Actually, although the pitch looked like a meadow, all it really required was a bit of TLC. It hadn't been touched for eighteen months.

I was able to get valuable advice from the Wolves groundstaff, who have been absolutely brilliant, particularly Ken Bates, whose son plays for our youth section.

They outlined the work that would be required to get the pitch into a playable condition as soon as possible. We had patches of overgrown grass, low spots and bare areas. We even invested £10,000 in pitch improvements to try and make the deadline.

We took a number of soil samples to establish what we were dealing with in terms of soil make-up and the nutrient status of the pitch. We are blessed with a very free draining soil profile with root growth below 150mm.

I mowed the grass to a manageable height to encourage it to tiller and become more dense. This was followed by a programme of vertidraining to relieve compaction and help increase aerobic activity within the soil profile. I then topdressed with 140 tonnes of sharp silicon sand to help improve surface levels and surface drainage.

Once that had been done, it was a case of regular ongoing maintenance to help improve the condition of the playing surface. I mowed every other day to around 28mm, fed the grass with granular fertilisers and harrowed to keep the sward open and to remove dead surface vegetation. I say 'around' because my current 'very old' Ransomes 24 inch Mastiff really is not up to the job, so I'm looking at getting a Dennis G860 36 inch mower to improve the cutting quality.

Paul Littlehales, a local spraying contractor, comes in, as when needed, to control the weeds and apply wetting agents and fungicides.

With a full growing season behind me the pitch has come on leaps and bounds and is beginning to look the part, especially when prepped for matches. It must be okay because the Wolves U15 Academy side play here now."

AFC Wulfrunians have taken a bold step by running the Castlecroft facility. Steve, Ian and Matt are mindful that the club now has some of the best facilities in the country at their level. They are also aware that everything revolves around the quality of the pitch.

With the players performance on the now excellent surface, and the backing of their supporters, the club look like achieving their dream of playing in the Midlands Alliance.