by External source
in Synthetics and Football
on 09 Oct 2013 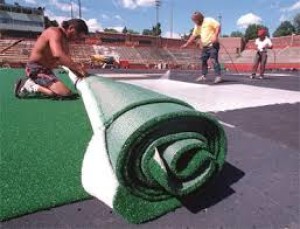 Those participating in the discussions will include Nicolas Evans, FIFA Quality Programme Manager and Professor Eric Harrison, a prominent FIFA consultant on the issue of artificial turf and the primary author of the FIFA Quality Concept for Football Turf.

Interest in artificial turf for use in football began in the 1980s, since which time artificial surfaces have developed considerably, in terms of providing a playing surface with similar characteristics to natural turf, player safety, and more recently in terms of avoiding the overheating problems associated with artificial pitches exposed to strong sunlight.

According to Professor Harrison, injuries were a serious issue in the 70s and 80s but third generation artificial pitches perform almost equally as well as good natural turf with analysis by ProZone indicating that "the technical data obtained on the high-quality natural turf and artificial turf showed no demonstrable difference."

Furthermore, according to Harrison, the problem of overheating, which was largely caused by the use of black rubber as infill for artificial turf has been overcome with the use of new materials.

Of course, whilst the quality of artificial pitches has certainly improved over the years, the techniques and management of natural turf has also enjoyed a revolution, clearly illustrated by recent installations of natural turf and hybrid surfaces at World Cup, African Championship and elite football stadia around the world.

The Cologne forum should provide some interesting pointers to the current state of play regarding pitch surfaces as footballing authorities look to provide the best advice for installations at all levels of the game.

This article was sourced from: www.Insideworldfootball.com