by Blair Ferguson
in Football, Renovations & New Builds, and Stadium News
on 20 Mar 2020

The recent FIFA Under-17 World Cup in Brazil was the eighteenth edition of the competition. For the restructured FIFA pitch team, led by their Pitch Management Manager, Alan Ferguson, this was the fourth tournament in just under a year and the first international competition to be held outside Europe. Blair Ferguson reports. 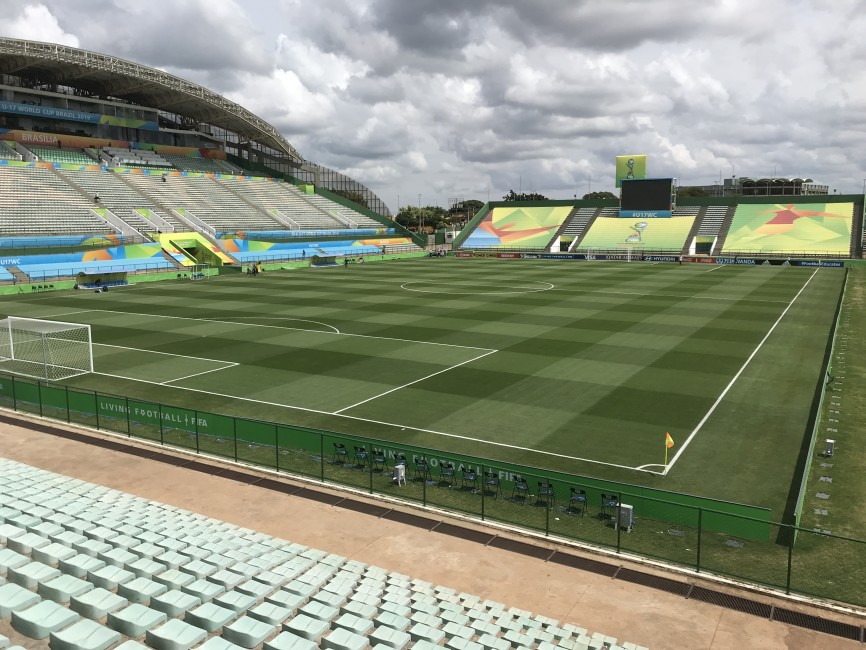 The FIFA Under-17 World Cup is contested between 24 teams from the six FIFA confederations and is held once every two years. Until this year six stadia have been used to host the 52 game programme, but the decision was made that the 2019 event would be played in just four.

These games took place between October and November 2019 and were initially scheduled to be hosted in Peru, but following a series of inspections, it was decided the country was not quite ready and will instead host the 19th edition in 2021. Keen to keep the competition in South America, Brazil was picked as the new host.

Brazil is one of the most famous footballing countries on the planet, and they have the World Cups and tournament hosting experience to match. The Confederation of Brazilian Football (CBF) has hosted the 2014 FIFA World Cup, the 2016 Olympic Football tournament and last year the 2019 Copa America. With a certain amount of infrastructure already in place, the move from Peru to the spiritual home of football seemed to be the obvious one for several reasons, but pitch quality didn't rank highly on that list.

The first proper inspection visit to Brazil did not take place until April, leaving just six months in which to go to contract with the stadia and training sites as well as all the hotels, flights and other logistical elements. The tournament was scheduled to be played from the 23rd October to the 17th November 2019, but as the Brazilian season was in full swing, it was decided that the tournament would be played at smaller stadia more commonly used to host second and third tier games. 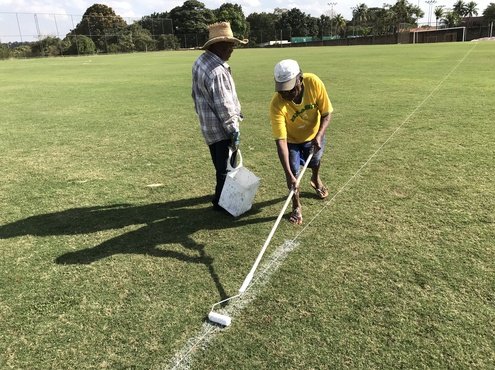 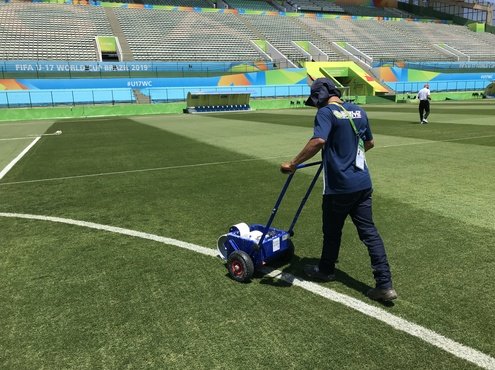 The four stadia were selected in the three cities of Brasilia, Goiania (two stadia) and Vitoria. Each host city also had a number of training sites appointed. During the first inspection, Alan, supported by Andy Cole from iTurf, inspected the four match pitches and fourteen training pitches.

"Hosting fifty-two games in twenty-three days is a tall order for any pitch in any stadium," Alan began. "To make things a bit more difficult, the majority of games were scheduled to be played as doubleheaders, which made providing high-quality surfaces crucial."

"The pitches in the Estadio Bezerrão in Brasilia and the Estadio Kleber Andrade in Vitoria were to host eighteen games in twenty-three days and sixteen games in twenty-three days respectively. As all the pitches selected were natural, it was decided that these two would have hybrid fibre installed. A tender was carried out by iTurf on FIFA's behalf, and SIS Pitches were awarded the contract. Everyone connected with the pitch project knew that the stability needed to have a chance of delivering such an intense schedule would be there with the fibre, but what we didn't anticipate was how well the two pitches would handle hosting thirty-four games between them in that time."

"We documented the condition of them throughout the tournament, and we've been able to leave pitches that are at a much higher level than we inherited. One of our key objectives is to leave a strong legacy, and I'm very happy that we've been able to do that at both venues." 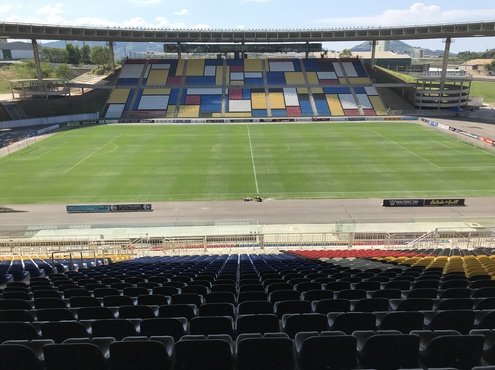 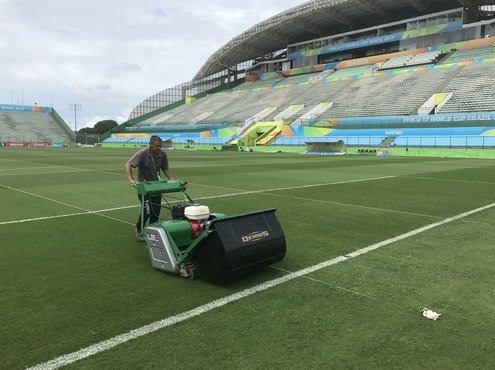 Upgrading these pitches was only a small part of the programme that had to take place in Brazil. A majority of the surfaces were 100% Bermuda and needed to be renovated to raise the standard. The logistics of installing the hybrid systems had to be considered, as did training for the groundsmen who would be maintaining them before and after the tournament.

Another pressing matter was irrigation. During November, the average high temperature in Brazil is 27.4OC with the low being 21.4OC. To facilitate the number of training sessions and matches, a considerable budget was required to service and repair the existing irrigation systems, as Alan explains.

"Each of the pitches had to be renovated to begin the process of bringing them up to international standard. With time short, a programme of verti-cutting, topdressing, aerating and seeding was carried out on each pitch. Being Bermuda, thatch build-up can be an issue if not managed, and a combination of lack of equipment, budget and general know-how meant that, until the renovations were carried out, the pitches were not being verti-cut more than once per year, which was simply not enough." 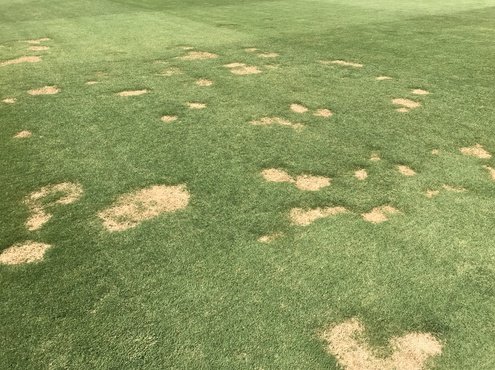 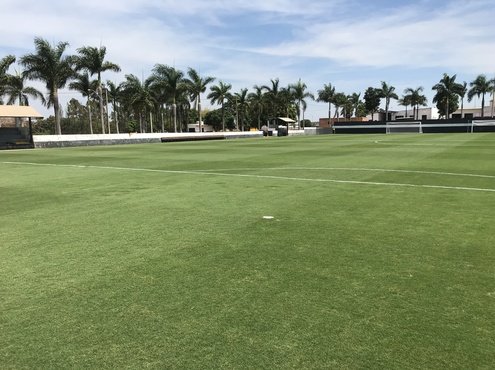 Ceilandia training ground before renovation ... and after renovation

"Following on from the verti-cutting, each pitch was allocated an initial 60 tonnes of sand to begin improving the micro-levels. Once applied and worked in, an additional 10 tonnes was applied to each pitch. The main focus for the pitch team, given the short lead time, was to provide a safe level surface for the players. The pitches in Kleber Andrade and Bezerrão had the advantage of the SISGRASS system, but we wanted consistency on all of the surfaces."

"To achieve that consistency, we had to address the irrigation systems. Fourteen of the eighteen venues needed their systems recommissioned or upgraded with new pipework, pumps or electrics. In the case of the Estadio Olimpico in Goiania, the pitch only had heads around the outside of the pitch with hoses being used to irrigate the central area. Rain Bird had installed all of these systems previously, and we asked them to assess each system and provide the FIFA pitch team with a solution. Around $200,000 had to be made available to bring the irrigation systems up to standard, but it was vital work that had to be done to ensure the success of the tournament." 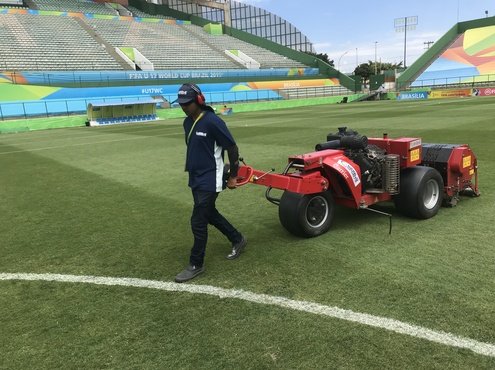 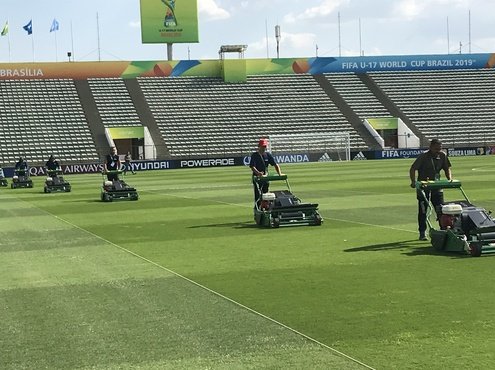 Verti-Drain and carrier in Estadio Bezerrão ... and post match cleaning

With the renovations and irrigation systems serviced and upgraded, focus switched to the two SISGRASS hybrid installations required in Brasilia and Vitoria. As a very specialised type of work, there are a limited number of companies who offer a system and, of those, many are located in Europe, making the logistics of moving stitching machines to South America at short notice difficult. Following a forty day sea journey, the fibre was installed in each pitch in seven days, and the SIS team worked around the clock in two shifts to ensure the pitches would have the maximum time to recover.

Alan believes that specialised systems cannot simply be installed and the local staff then left to carry on maintenance. To prevent that from being the case, a workshop on how to understand and manage hybrid systems was delivered by SIS director of natural turf, Carlos Reis.

Carlos has vast experience in the construction of football pitches in his native Portugal and around the world, including overseeing the building of six pitches in Russia for the 2018 finals for SIS. The workshop covered general maintenance as well as the renovation of the pitch. FIFA will also support both venues for the first twelve months to ensure they get the best from the legacy left. 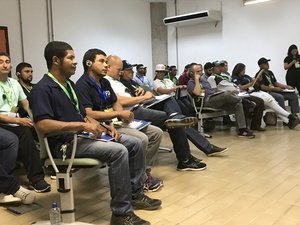 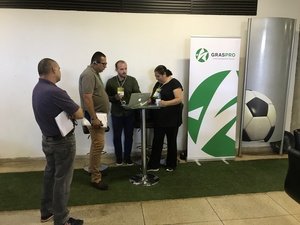 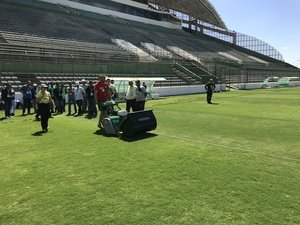 Delegates at the Brasilia Workshop

As part of the build-up, and in line with the other FIFA tournaments, a series of training workshops were held in the three host cities. Alan explains how the new format for delivering the workshops has worked and how they've been fine-tuned as the year has progressed.

"The combination of theory and practical on the day has been well received by the ground's teams," Alan said. "For many, it has been the first proper training they have received, and I think my team's efforts in delivering and continuously improving these workshops has made a difference to the quality of the pitches we deliver. The team are also looking for continuous development of the handbook given to each delegate and translated into the host language. It's a useful take away for the groundsmen and acts as a helpful reminder when final preparations are underway."

Training is an important part of FIFA's tournament legacy initiative, as is the equipment they are able to leave at each venue. FIFA aims to leave as much as they can in the form of equipment and other infrastructure to help raise the standard of football in a host country. For Alan, providing this equipment is a chance for each site to raise their own standards and keep them at a consistent level, but he recognises the challenges they face when it comes to budgets for maintenance. 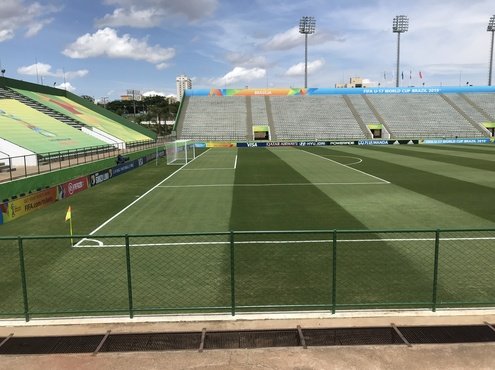 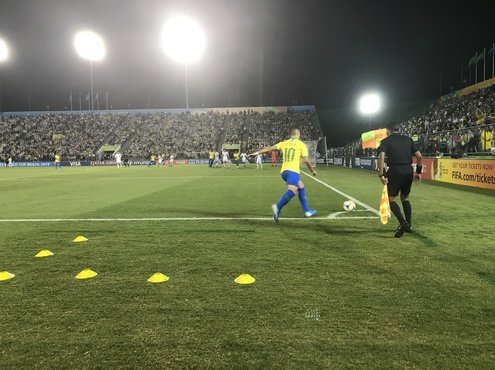 Brasilia before the game / The Brazil team in action

Whilst training the local staff is the preferred option, sometimes it just isn't possible. At the training sites, contractors were needed to drastically improve the quality. Many of them were well below the required standard when the first inspections were carried out, and urgent action was taken to renovate the pitches.

"With a period of only six weeks available to the team between starting the renovations and playing the first game, it was felt best to use four local contractors," Alan explained. "Whilst World Sports, one the best known in Brazil, was given the task of renovating three of the four stadia, other companies Campaneli (training sites in Vitoria) Enarpie (Kleber Andrade) and Green Leaf (training sites in Goiania and Brasilia) were tasked with delivering the renovations and maintenance."

"The contracts were issued in two parts. The first part was focusing on the renovation and the second part on the tournament delivery. All the contractors met with the FIFA pitch team during the week of the workshops to agree on what could realistically be achieved in the time available. Once agreed, the contracts were issued against the quotes received, with a rate card agreed to bring uniformity to the costs." 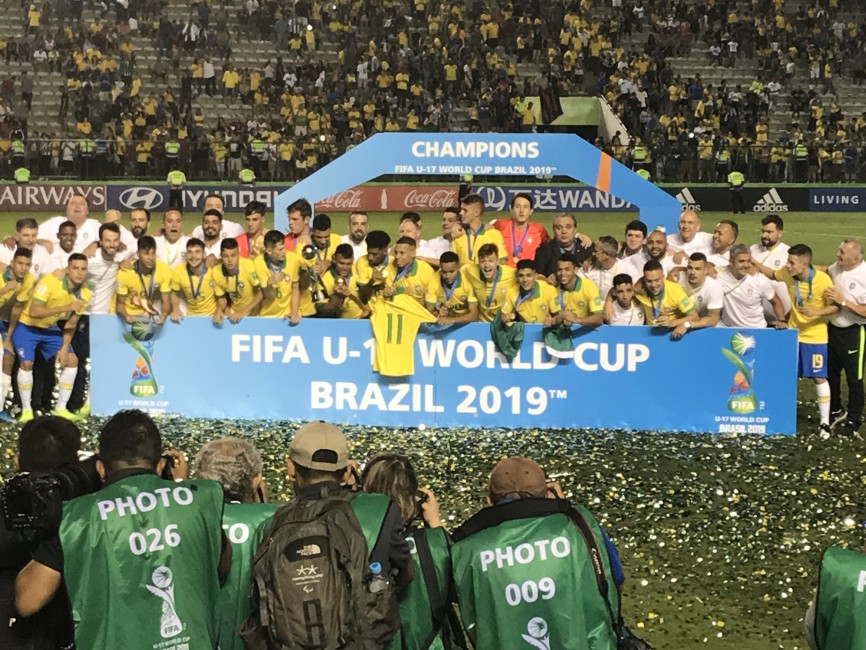 "The renovation programme followed the same format as the stadia with the focus very much on cleaning out the thatch layer ahead of topdressing and fertilising. Bermuda can regenerate very quickly and, with temperatures still high in Brazil at the time of the works, it was felt that any attempts to transition in ryegrass would not be successful. The transition to rye in the stadia was only to boost the aesthetics of the striping, which worked for the three weeks of play."

From the first kick off on the 23rd October to the final on the 17th November, the tournament went well for the team. With all fifty-two games played on schedule and on good surfaces, the 18th Edition of the FIFA U-17 World Cup was well received by players and coaches alike. For Alan and the FIFA pitch team, there was a real sense of achievement at what had been delivered in Brazil given the low starting point they had inherited at the first inspections.

The intensity during the six months leading up to the tournament - and the twenty-three days during it - provided a different test for the FIFA pitch team. For Alan, it was one of the toughest projects he has faced with it being in an area of the world with a lower level of turf infrastructure on a short time frame.

Seven months of hard work from the local groundsmen and FIFA pitch team culminated in a fitting end. The final of the 2019 tournament was played between Brazil and Mexico in the Estadio Bezerrão, with the host nation coming out 2-1 winners thanks to an 84th minute goal that saw them draw level and a 93rd minute penalty that proved to be a late winner and saw the famous yellow shirts lift their fourth U-17 World Cup.