In the second of a series of updates, FIFA's newly appointed Senior Pitch Management Manager, Alan Ferguson, discusses the issues surrounding the staging of the Club World Cup and Asia Cup, with a National Day thrown in for good measure! Blair Ferguson reports. In December 2018, Real Madrid made FIFA Club World Cup history by winning the tournament for a third successive time in the Zayed Sports City Stadium, Abu Dhabi. But Los Blanco's weren't the only history makers. The tournament was also the first time pitches were delivered under the guidance of FIFA's newly appointed Senior Pitch Management Manager, Alan Ferguson.

His appointment is one of several within the Stadium and Infrastructure department which will cover all FIFA tournaments and support the 2020 Olympic football tournament in Japan. Being the smallest of the FIFA World Cups, the Club World Cup offered an ideal opportunity for Alan and his new colleagues to try out some of the procedures and techniques they hope to use worldwide in future FIFA managed tournaments.

Despite the relatively small scale of the tournament compared to other FIFA competitions, there were still plenty of challenges for Alan and the team because the same venues used for the Club World Cup needed to be fully match ready to host the 2019 Asia Cup two weeks after the final of the Club World Cup.

However, this wasn't the only issue facing the new team. The Zayed Sports City Stadium also had to host Abu Dhabi's 47th annual National Day celebrations seventeen days before the semi-final, causing venue changes for fixtures and placing a greater strain on the Hazza Bin Zayed Stadium in Al Ain, the only other venue chosen to host Club World Cup games. 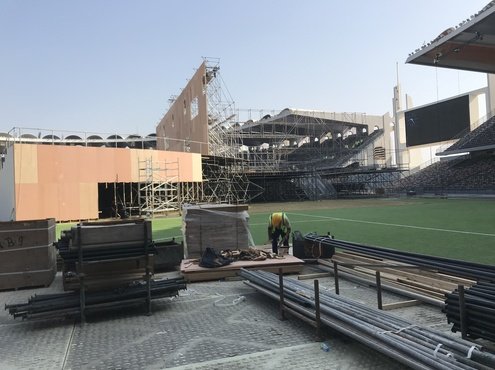 These issues were then further compounded by having to use much of the native fine sand in the pitch construction. Unlike the angular sands commonly found and used in pitch construction across Europe, the round particle sand does not provide the stability associated with angular sands and can create issues with all round stability and general player interaction with the surface. It also makes it harder for the young roots to fully establish in short time frames, reducing the chance of the surface holding together under play.

Alan explained to Pitchcare how these challenges were dealt with, and how important the inclusion of a hybrid element in the construction was in producing pitches that could cope with the intensity of two tournaments being played back to back. It would also provide another first for FIFA as it was the first time a lay, stitch and play pitch would be used in a World Cup in this time frame.

"Our biggest initial challenge for the Club World Cup was having the National Day celebrations in the main tournament stadium," Alan explained. "The day is very significant for the people of Abu Dhabi as it marks the UAE's Union Day between the seven emirates and there was no possibility of moving the event away from the stadium. The stage for the event covered the entire playing surface and was one of the biggest I have ever seen on a pitch. Our concerns were high from the first inspection carried out in November 2018 with the venues Grounds Manager, Matt Jones. Matt is used to non-football events being held in the Zayed Sports City Stadium as they host major events like many other stadia around the world, but the size and scale of the National Day gave all concerned with the Club World Cup a real headache and challenge." "One of the difficulties of building pitches in the UAE and Middle East in general is the finer rounder particle sand that is available. If you have enough time to grow the pitch in, then stability can be managed and isn't as big an issue but, with the limited timescale and heavy schedule we had, it was going to be a problem. Having worked with various hybrids in recent years, it was already obvious from the match and training schedule the team were facing that the turf on its own would not be sufficient to provide a suitable surface for the finals. For me, the answer was straightforward; by installing stitched fibre into both pitches, I was confident we could significantly boost the performance of the turf in Zayed Sports City and take it through the tournament and give Matt and his team a fighting chance of surviving the Asia Cup whilst, up in Al Ain, add strength to an existing natural pitch."

"The issue in the second tournament stadium - Hazza Bin Zayed in Al Ain - was that the National Day celebrations had displaced three games, meaning five games had to be played in the stadium in six days on a 100% natural pitch. Match day 2 and 3 saw the games played back to back on the same day. Three weeks later, the same pitch had to host eight games for the Asia Cup. Another significant factor to be considered was the Asia Cup rules allows match day minus one training on the match pitch, meaning that it would actually see twenty-four uses over the period of the Asia Cup. The 100% natural pitch would struggle to make it through the Club World Cup, leaving the grounds team little time to reinstate it for Asia's premier international football event." 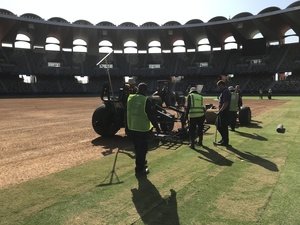 "It was clear that, to achieve the stability of the pitch we wanted in the Zayed Stadium, we would have to use a lay, stitch and play technique, and it was the first time FIFA would do this to provide a top quality pitch in such a short space of time. The technique had been used in Samara, Russia for the 2018 World Cup, but it was done over a much longer period of time."

"The theory here was to use the stitched hybrid to support the new roots rather than relying on the upper profile as much. As I said, the stitching technique has been used many times before and is a proven method. For us, the risks of not doing it for the competition were high, with all around playability, player safety and the reputational risk to FIFA and the Asia Cup."

"The Local Organising Committee (LOC) had been negotiating with contractors based in the UAE around the delivery of maintenance for both the training sites and the stadia. The best decision taken in the build-up was to retain both SIS Pitches and Dessert Group who had delivered the tournament pitches in 2017. The contracts for both were extended, allowing the maintenance to be continued for the entire twelve month build-up." 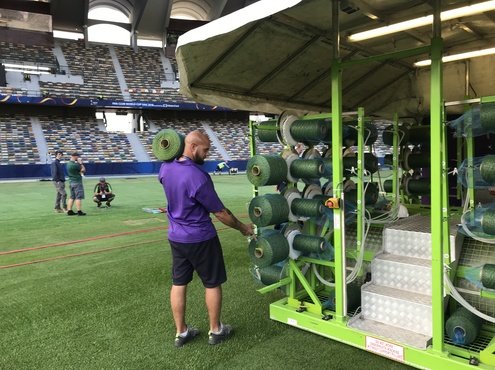 "Both companies were also responsible for the delivery of the pitches for the 2019 Asia Cup and this meant that equipment that wouldn't normally be available so close to a final was working in the country finishing some of the stadia being used. It also ensured consistency across the delivery, something we are keen to improve on for our tournaments."

SIS Pitches had already been awarded a contract to build the pitch at the new 15,000 capacity El Maktoum Stadium in Al Nasir, Dubai. The venue was one of the new stadia to be used for the Asia Cup and, because the pitch ordered was a SISGRASS hybrid, the stitching machine was already in the UAE and could be used in Abu Dhabi after the National Day celebrations. Alan views the proximity of the machine more as good fortune than good planning, with a rigorous customs process avoided for any machines that would have been needed from outside Europe.

The event was held successfully on 2nd December, but the final clearing of the pitch wasn't completed until the 8th. SIS Pitches began cleaning out the old organic matter in the afternoon of the 8th, whilst a second-team were preparing to harvest the new pitch from a local nursery which had been set up at Abu Dhabi Cricket Club. A third SIS team were also working at Al Ain at this time to stitch SISGRASS into the existing pitch to help it cope with the extra fixtures. 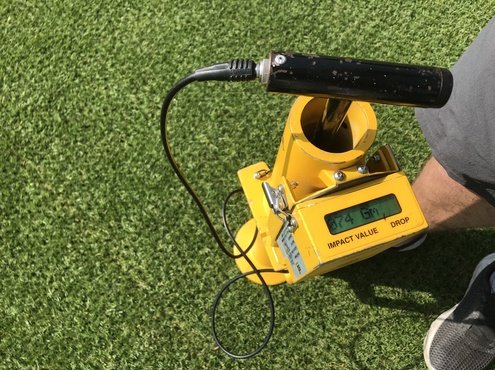 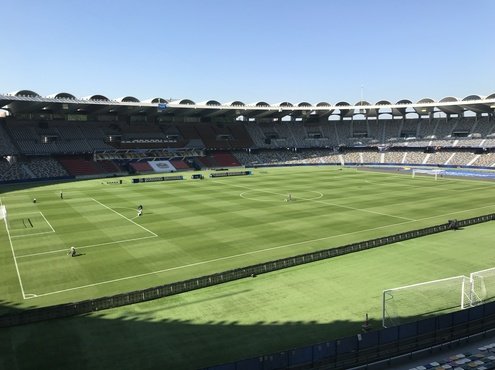 As the works were ongoing, testing was underway to assess just how quickly the newly stitched pitches were in terms of readiness for play. Pro Pitch consultants, who were retained by the LOC, monitored both pitches closely. The data gathered from the pitches would go a long way to help with planning for future tournaments. iTurf, who are retained by FIFA, tested before the games alongside Alan's own testing. Key parameters, such as surface hardness, moisture and traction among others, were monitored closely, with more test sites than normal used to ensure the delivery had been consistent over the entire playing area.

Four days after stitching was completed in Al Ain, the first games took place. Surface hardness was 75 Gravities on average, with moisture at 23%. Damage limitation was key as games two and three were being played back to back on the 15th before a second doubleheader for games four and five on the 18th.

The observations during the installation also revealed that traction levels were inside the optimum range within hours of the fibre being delivered, with surface hardness coming in to the optimum range forty-eight hours later. The unique action of the stitching machine, combined with verti-draining the profile ahead of it to aid the entry of the needles, completely decompacted the profile to levels that had not been fully anticipated, but pitch preparations which were following the installation quickly saw hardness levels rise back to optimum levels. 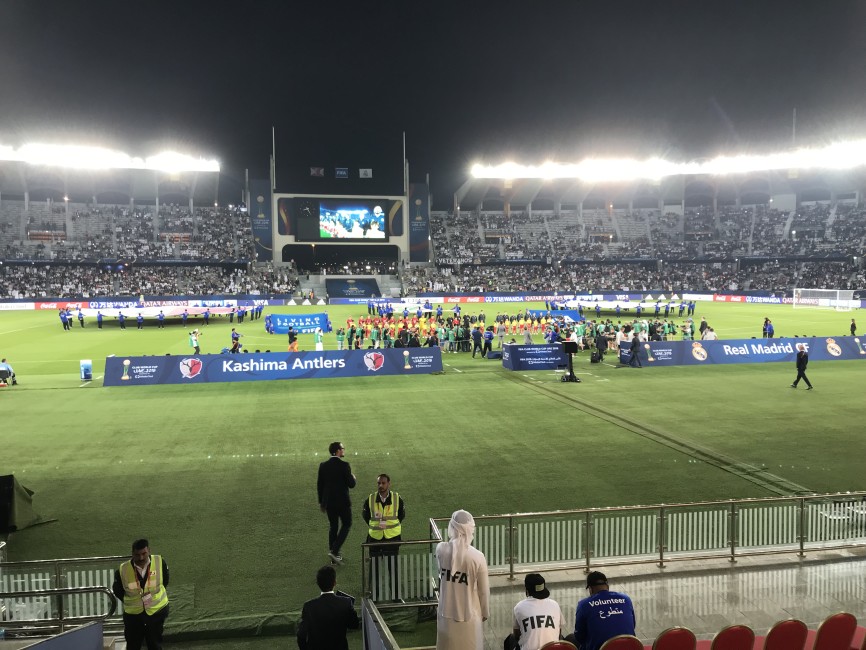 Whilst preparing the pitches for the best chance of success was important, Alan was also focused on managing them throughout the games. One of his aims at FIFA is to work with local groundsmen and use these experiences to improve their knowledge and educate them on new techniques and technologies. For this tournament, Alan also wanted experienced staff on hand to help manage training sessions and games; something he thinks helped to contribute to the overall success.

For Alan and FIFA, the experience of the Club World Cup has given them a strong indication of what is possible at future tournaments. He said: "The 2018 Club World Cup was one of the most successful editions held. It was the first one to be staged under the new FIFA pitch management model and, because of that, we were able to make decisions and manage it very effectively when we were presented with challenges."

"Beyond the men's World Cup, where most of the stadia are new builds or extensive renovations, FIFA's flagship competitions will be hosted in existing league venues that have a multi-use schedule. I believe we will experience the same scenario we faced in the UAE more and more and have to ensure we have the best techniques identified to continue to provide the world's top players with the world's top pitches. The pitch operations have gone a long way to showing us what the future looks like and how we can achieve it."