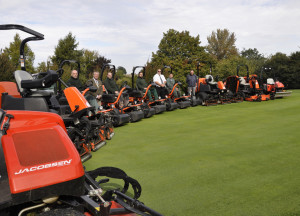 Course Manager David Horn was appointed Deputy Head Greenkeeper back in 1987 and has now spent 27 years tending the playing surfaces at the 6,295 yard course. He heads a team of five loyal greenkeepers and is delighted with the new fleet.

"This is our fifth consecutive leasing deal with Ransomes Jacobsen and Ernest Doe; the package they put together includes a full service and maintenance contract and it works really well for us. The service we get from Doe's is of the highest order and their new Service Manager at Dartford together with the two Service Technicians dedicated to our contract provide exceptional after-sales support," he said. 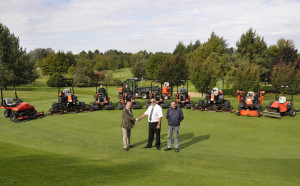 As well as the four GP400s, the Jacobsen fleet includes two LF570 fairway mowers, an HR6010 batwing rotary for the semi-rough and a Tri-King. Completing the Ransomes Jacobsen package is a Smithco Super Star bunker rake and a greens roller.

"On our previous agreement we were using a Jacobsen HR5111 batwing rotary and I was a bit sceptical replacing it with the HR6010, but I needn't have worried. It's a very good, powerful mower and the team love it," David added.

The 6,295 yard course is 85 years old with many mature trees in the playing area, so tree management is a major element in the team's workload. It also sits just 1.5 miles from the river Medway estuary and cold north and easterly winds often hinder the spring maintenance programme causing a delay in overseeding, aeration and agronomic practices. For the first time in 15 years, David has overseeded the greens and he is delighted how they have responded. 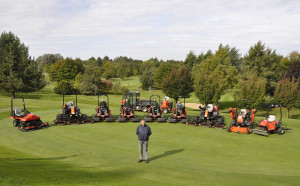 "We overseeded using a sand/seed injection process over a couple of days in the middle of April and they had recovered well a month later. Now, at the end of September, they are looking and playing really well, so I'm really pleased with the result," he concluded.