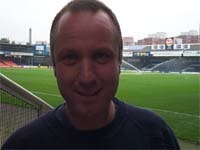 Well, the Christmas and New Year hasn't been particularly kind to us here at Leicester, it started on the 21st December where we put our evergreen frost covers out on the pitch in readiness of a -2 frost, heavy rain had fallen and the pitch froze prior to the West Ham game. I had to call in extra staff on the match day morning to get the covers off ready for play.

By the 24th we had put the pitch back, divoted, brushed and mown and looked at the ten day forecast to make our decision. On the 27th we put out our McCloud cover flat on the ground. On the 30th I decided to inflate the central tube, raising the cover up off the pitch. The outside temperatures now were consistently below freezing, so I installed nine space heaters under the covers. The cylinders of gas for the heaters required changing every eight or so hours, so a rota system was set up with the staff to work around the clock. On the 31st we all came in to clear the ice and snow off the cover and worked through the day until 6:15pm to make sure that the covers could be taken off on the match day relatively easily and quickly. On New Year's Day morning at quarter past midnight I was in changing the gas cylinders on the heaters and then back in at 7:30am to prepare for the match, a pay per view premier game against Arsenal. The temperatures day and night had not risen above freezing and were as low as -7 degrees.

The referee came in quite early to inspect the pitch that was soft in most places.

Our next game was against Mansfield in the FA cup 3rd round, so I ensured more heaters were available, the pitch was much softer and the temperatures weren't so severe and the game was played without incident.

Now, I am fortunate to have a three-week break and as the Filbert St pitch has suffered due to the extreme weather conditions that occurred over the Christmas period, the pitch needs some tender loving care. So, with the "Mediterranean" temperatures that this week has given us, my able assistant Ed and I have over seeded the pitch with 5x 25kg's bags of grass seed using the Sisis Variseeder and then brushed the seed into the pitch.

The pitch is being verti-drained today with 1.5metre greens verti-drainer using 3/4" tines to a depth of 8 to 10 inches. This will help gaseous exchange and encourage the roots to develop.

With the amount of rain that we have been experiencing, the water has been slow to drain off the surface of the pitch, so my regular maintenance methods have temporarily changed, especially for matches. The only 'rolling' I do at the moment is when we use the brush cassette system in our Dennis mowers, to clean up the surface after games. There after we hand brush with the 4ft wide drag brush, for the cosmetic block patterns.

After the verti-draining has been completed, we will pour 2 EW kiln dried sand down the verti-drain holes in the north end goalmouth. This will improve the drainage and aid stability in this area. We do this task quite a lot at the training ground, in the goalmouths and any over used areas, where stability is deteriorating on the playing surface.
Then we will cover the pitch with the Evergreen germination sheets and pray for the temperatures to remain fairly warm for the time of year. And hopefully benefit with the pitch regaining some grass cover! I will keep the covers on for about 5 or 6 days.

As you may be aware Leicester is having a new stadium built and the pitch construction is now underway. In the next couple of weeks I will be telling you about the new pitch and stadium in some detail.