This week we have had three games in the last week, starting with Manchester United last Saturday, Celtic in a friendly on Monday and a reserve match on Wednesday.

The pitch has taken a lot of wear and tear, but we have some good growth now, following an application of 20:10:10 two weeks ago. I took this extreme measure to boost quick growth following a seeding operation through the middle of the pitch and the goalmouths.

We have suffered this season with poor root growth, so for the final few games, I am forcing the growth to improve the playing surface, now we have some sunshine. 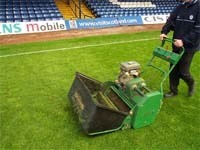 The last couple of weeks have seen no rain, so we have to regularly irrigate the pitch to keep the surface moist and help the new seedlings establish themselves. Although we have missed the rain recently, we have had problems this season with water logging in certain areas. I called in a local

It has been a hard week of divotting and pitch preparation for the games.

Yesterday we replaced the divots after the reserve game, verticut the pitch and used a Sisis 'twin play' to brush the sward. I now have a bit of a break, as our next game isn't until a week Saturday when we play host to Aston Villa.

As we are moving to our brand new stadium, across the road, I don't have to worry about any end of season renovation work at Filbert Street.

I will be taking over the maintenance at the new stadium from the contractors (Hewitt's). I have been going over to the stadium regularly to watch the new construction in progress and the seed has this week been sown. Effectively from the 15th of April, I will start to monitor the rate of growth and make sure that the pitch is irrigated to ensure seed germination and then establishment. I will probably start the first mowing operations on the new pitch in three to four weeks time. As the weather is quite cool in the stadium I would expect the seed to take up to ten days to germinate.

The profile of the new pitch is 200mm of Mansfield Sand MM35 moist sand, topped off with 100mm root zone mix with fibre sand incorporated. We have a drainage system of perforated pipe work at 5 metre centres, and there have been sand slits installed over the top at half metre centres.

We also have a full hot water under soil heating system (HOORAY!) and pop up irrigation, and I will explain these further next time.