Filton College, the centre of academic and sporting excellence for the southwest of England based on the outskirts of Bristol, has purchased a Jacobsen AR3 three unit ride-on mower from local Ransomes Jacobsen dealer, TH White Ltd.

The new mower is being used to maintain the new stadium pitch at their WISE Campus (West of England Institute of Specialised Education) under the direction of Nigel Hornsby, Head of Grounds and Maintenance. The WISE campus, which opened in 2005, was built at a cost of £17.5 million and is dedicated to performing arts, fine art and sport.

In 2010, the Stoke Gifford stadium as it is known and home of Bristol Academy Women's Football Club (BAWFC), underwent a £500k investment to develop it into the only dedicated women's football stadium in the country to meet the Football Association's Women's Super League grounds grading standards. It is the first stadium to be designed primarily for women's football and BAWFC are the only team in the Super League not affiliated to a professional football club.

The grounds maintenance at the college was previously contracted out until Nigel Hornsby was appointed in September 2009. He is responsible for two sites and is supported by Rob Lloyd and Sofia Sousa, apprentice grounds staff who are studying for NVQ Sports and Amenity Horticulture. 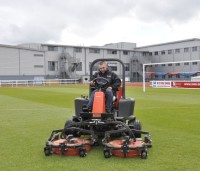 "When I came here I had very little to work with," he said, "no staff, no equipment and playing surfaces that required significant improvement and investment. There was also the major project of building a stadium that met the Football Association's requirements for the Women's Super League competition. Fortunately, I had the complete support of the Principal, Kevin Hamblin, whose goal is to have the best sports college in the country, and resources were readily provided, culminating in the superb facility we have here today.

"The Jacobsen AR3 mower has certainly contributed to this; it's a really comfortable machine, leaves and excellent finish which is very important as the Women's Super League is televised on ESPN, so presentation and visual appeal has to be the best. I've also been impressed by the support I've received from TH White, my local dealer; it's up there with the best."